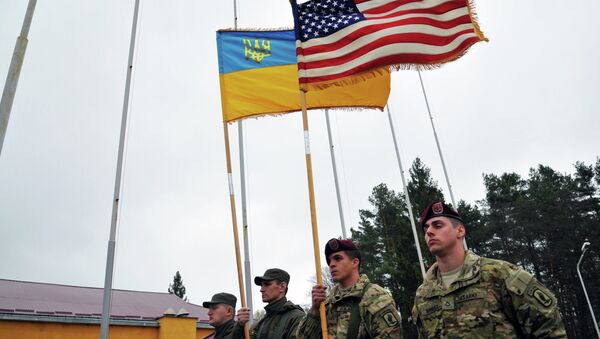 © Sputnik / Stringer
/
Go to the photo bank
Subscribe
WASHINGTON (Sputnik) - CIA collaboration with the Ukrainian Security Service (SBU) is part of the standard US playbook that calls for working with local client states to undermine and even spark conflicts with adversaries like Russia, analysts told Sputnik.

On Monday, a former SBU employee, Vasil Prozorov, told reporters in Moscow that CIA officers are in Kiev and often visit the SBU to plan operations.

Prozorov said at his press conference that UK and US experts had been training an SBU counterintelligence unit that was allegedly responsible for regular acts of terrorism and sabotage in eastern Ukraine.

Preparing for War with Russia

It has been part of the CIA playbook to use client states to do preliminary work in weakening the political systems of declared enemies, former US Army Major Todd Pierce, a lawyer and historian, told Sputnik on Tuesday.

"It is consistent practice and has been well documented over the years that the CIA is directly involved in subverting any country whom the US has begun to target as the ‘enemy'". Pierce said. "It would therefore be consistent with past practice to train Ukrainians both for their fighting skills, but also to be coordinated with US forces".

Russia has been designated as an enemy in the US national security strategy, Pierce observed, but the United States will try to blame Moscow for any conflict.

Learning From the Best: Ukraine Hiding CIA-Style Torture Chambers From West
"Although, we would frame it that we are acting in ‘self-defense,’ as we framed it with Iraq, Libya, Syria, Yemen, and Venezuela… the CIA goal would be to prepare forces capable of waging offensive operations within Russian territory", he said.

Beginning with low-intensity conflict operations including information warfare to condition the battlefield, Pierce explained, is the "American way of war".

"This has been the way the US has triggered and conducted all its wars since the end of World War II, most notoriously in North Vietnam with Oplan-34A where we sent saboteurs into North Vietnam before the Gulf of Tonkin incident, which likely triggered it in the confusion created," he said. "Elements of the US government have been engaged in fomenting unrest in Russia’s former territories to bring them under US influence, such as with Georgia and Ukraine".

Pierce said the practice to encircle Russia goes back decades under nearly every US administration since the 90s.

"A clandestine war to encircle Russia can in fact be attributed to the Clinton administration with what went on in Yugoslavia after the collapse of the Soviet Union", he said.

Currently, tensions with Russia were being heightened for US geopolitical purposes, Pierce observed.

This presented "the always present danger of a miscalculation triggering a war, with Ukraine right in the middle of it, with even the risk of a ‘localized’ nuclear conflagration present should a military clash with Russia be triggered", he said.

Former CIA officer Larry Johnson, a member of Veteran Intelligence Professionals for Sanity (VIPS), also told Sputnik that it would be common operational practice for CIA officials to visit SBU operatives in their own buildings.

Former Canadian diplomat Patrick Armstrong, Ottawa’s former charge d’affaires in Moscow said the latest reports showed how dependent Ukraine had been on Washington since the democratically-elected government of President Viktor Yanukovych had been toppled in Kiev in 2014.

Pierce said the new reports concerning the close and ongoing CIA-SBU cooperation should have a significant impact on the upcoming Ukrainian national vote.

"This revelation should have an impact on presidential elections in Ukraine as their sovereignty is being given over to the US in the name of defending them against Russia", he said.

Ukraine’s presidential election will be held on 31 March. The upcoming presidential election will see an unprecedented number of candidates for Ukraine — 39. According to the poll conducted by the Kiev International Institute of Sociology and published on Monday, comedian Volodymyr Zelenskiy is projected to receive 32 percent of votes. Incumbent President Petro Poroshenko is expected to gain 17 percent of votes.

000000
Popular comments
Sounds about right!
Blackspeare
27 March 2019, 04:51 GMT1
000000
total crazy bully usa. James Bissett, former Canadian ambassador to Yugoslavia and Albania, revealed the purpose of this strategy was explicitly to inflame and escalate tensions in order to create a pretext for Western intervention. The hope was that with Kosovo in flames NATO could intervene. So where else have we seen that kind of politics ? everywhere yes by usa, now in Venezuela. Same old scandalous behaviour, create uproar and then intervene to help the poor people hahaha. Shame shame ! remember Maidan Ukraine ? same also.
Djodj
27 March 2019, 09:06 GMT1
000000
Newsfeed
0
New firstOld first
loader
LIVE
Заголовок открываемого материала
Access to the chat has been blocked for violating the rules . You will be able to participate again through:∞. If you do not agree with the blocking, please use the feedback form
The discussion is closed. You can participate in the discussion within 24 hours after the publication of the article.
To participate in the discussion
log in or register
loader
Chats
Заголовок открываемого материала
Worldwide
InternationalEnglishEnglishMundoEspañolSpanish
Europe
DeutschlandDeutschGermanFranceFrançaisFrenchΕλλάδαΕλληνικάGreekItaliaItalianoItalianČeská republikaČeštinaCzechPolskaPolskiPolishСрбиjаСрпскиSerbianLatvijaLatviešuLatvianLietuvaLietuviųLithuanianMoldovaMoldoveneascăMoldavianБеларусьБеларускiBelarusian
Transcaucasia
ԱրմենիաՀայերենArmenianАҧсныАҧсышәалаAbkhazХуссар ИрыстонИронауОssetianსაქართველოქართულიGeorgianAzərbaycanАzərbaycancaAzerbaijani
Middle East
Sputnik عربيArabicArabicTürkiyeTürkçeTurkishSputnik ایرانPersianPersianSputnik افغانستانDariDari
Central Asia
ҚазақстанҚазақ тіліKazakhКыргызстанКыргызчаKyrgyzOʻzbekistonЎзбекчаUzbekТоҷикистонТоҷикӣTajik
East & Southeast Asia
Việt NamTiếng ViệtVietnamese日本日本語Japanese中国中文Chinese
South America
BrasilPortuguêsPortuguese
NewsfeedBreaking
YesterdayFauci Speechless After US Senator Asserts Epidemiologist 'Overhyped' COVID-19 Pandemic
YesterdayFrench Presidential Candidate Zemmour Attacked at Villepinte Rally - Reports
YesterdayTrump Slams Top US General Milley as 'F**king Idiot' Over Afghanistan Withdrawal
YesterdayWWII Veteran And Longtime US Senator Bob Dole Dies at 98
YesterdayIran Blames US Stubbornness on Sanctions for Breakdown of Vienna Nuke Talks
YesterdayZemmour Says He 'Would Like' to Withdraw France From NATO
YesterdayIsraeli Deputy Defence Minister Dodges Question About Tel Aviv's Complicity in Natanz Blast
YesterdayCorridors of POWDER: Brits React to News of Drug Sniffer Dogs in Parliament
YesterdayMercedes' Hamilton Takes Win in First Saudi Arabian GP After Chaotic Battle With Verstappen
YesterdayTucker Carlson Was Reportedly Friends With Hunter Biden, Intervened in Media Report on His Behalf
YesterdayPutin: People Vaccinated With Sputnik V Should Not Be Deprived of Right to Travel
YesterdayPolish Authorities Officially Confirm Detention of Russian Ship Ruslana
YesterdayBelgian Police Use Tear Gas After Clashes With COVID-19 Protesters Broke Out in Brussels - VIDEO
YesterdayTrump's Media Company Says Raised $1Bln From Investors
YesterdayOrigin of Water on Earth: Mystery Solved?
YesterdayIdentity of Baroness Mone's Accuser Reportedly Revealed as She Denies Racist Claims Against Her
YesterdaySniffer Dogs Could Be Deployed in UK Parliament as Cocaine Found Near PM’s Office, Report Says
YesterdayDemocrats Were Wrong After All: IRS Data Reportedly Shows Trump Tax Cut Benefited Middle Class Most
YesterdayOvechkin Repeats NHL Record of Scoring 20 Goals in 17 Consecutive Seasons
YesterdayUK Justice Sec Raab 'Not Convinced' of 'Strait-Jacket' Vaccine Mandates