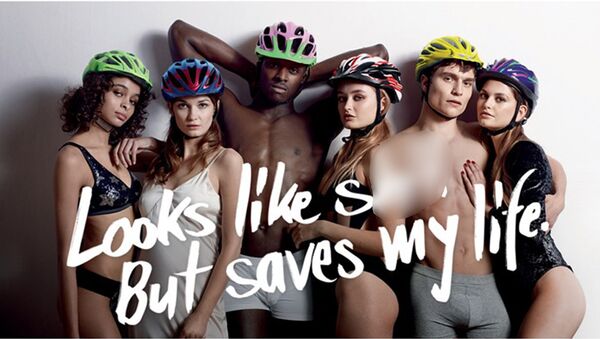 The German transport ministry’s launch of an advertisement with half-naked models wearing cycling helmets, for the promotion of safety among bicycle riders, has been mocked on social media and sparked sexism accusations.

The photos of young models in underwear and helmets appearing with the slogan: "Looks like s***. But saves my life", was created under the aegis of a safety campaign encouraging cyclists to care about their safety on the roads. The project was initiated by the German government in collaboration with Germany's Next Top Model show.

The posters are set to be hung throughout Germany beginning next week. However, not everybody appreciated the benevolent intentions of the ministry and even accused the advertisement creators of sexism.

"Hard to know what was going through their heads when they came up with this ad campaign. Maybe they have hit their own heads once too many times…," wrote the Australian Cycle Alliance.

Some top-level officials also expressed their dissatisfaction with the campaign.

Franziska Giffey, the German family minister, criticized her colleague, the German transport minister, in a Facebook post, saying: "Dear Andreas Scheuer: fully dressed also goes well with a helmet!" She also posted a photo of herself in a business suit with a helmet on.

"It is embarrassing, stupid and sexist for the transport minister [Andreas Scheuer] to be selling his policies using naked skin," Maria Noichl, an MEP and chairwoman of Germany's Social Democrats women's wing, told Bild am Sonntag.

In defence of the campaign, a transport ministry spokesman said: "A successful road safety campaign should jolt people and can be polarising."