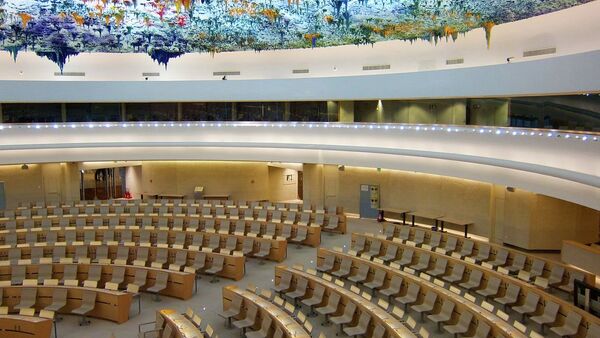 Discussions are underway in Brussels for the listing of Masood Azhar as a global terrorist by the European Union, diplomatic sources told Sputnik. Experts opine that an EU ban would go a long way in exerting pressure on China to support the UNSC proposal to impose sanctions on the dreaded terrorist.

New Delhi (Sputnik): Germany has initiated a proposal at the European Union to ban Jaish-e-Mohammed (JeM) chief Masood Azhar as a global terrorist.

"Germany has taken initiative to include Masood Azhar in the list of global terrorists in the European Union. Germany has approached several countries to garner support on this proposal", diplomatic sources told Sputnik.

Indian Minister Asks if Pakistan PM Generous Enough to Hand Over Masood Azhar
The 28-country European Union has been supportive of India's stand and its fight against terrorism, especially after the JeM killed 40 Indian soldiers in a deadly suicide car bombing in Pulwama of disputed Kashmir on 14 February this year.

"The move by Germany will definitely put pressure on China as China is the only country opposing the designation of Masood Azhar as a global terrorist by the UNSC. Further, I think it will also pave the way for the blacklisting of Pakistan by the FATF (Financial Action Task Force). Earlier the EU had pulled up Pakistan for not taking adequate measures to control international terror. Therefore it would be a diplomatic victory for India if the EU puts Masood Azhar in their global terror list. In fact, after the EU ban, the UNSC ban will not be far behind. India has got unprecedented support from various countries over its fight against cross border terrorism after the Pulwama terror attack", Skand Ranjan Tayal, former Indian ambassador to Uzbekistan and South Korea, told Sputnik.

The EU sanctions would mean Azhar would not be able to travel across any of the 28 European countries and all his assets, if any, in those countries would be frozen.

Earlier on 15 March, France imposed financial sanctions on Masood Azhar after China blocked a UN Security Council (UNSC) move to get the Pakistan-based militant leader designated as a global terrorist.

The French government then said that it would discuss with its European partners the matter of putting Masood Azhar on a European Union list of terrorists and terror organizations.