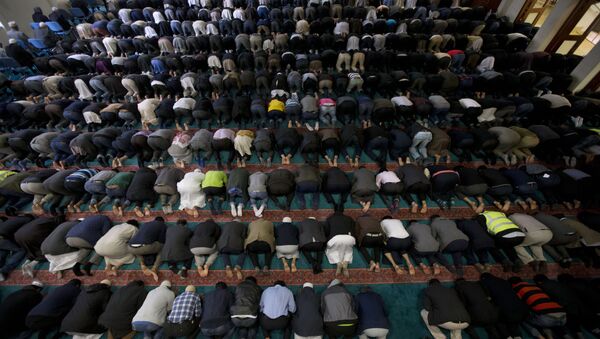 © AP Photo / Matt Dunham
Subscribe
MOSCOW (Sputnik) - The UK Home Office announced on Tuesday that it is increasing security funding for places of worship and sets up an additional 5 million pound ($6.6 million) fund in the wake of deadly New Zealand mosque shootings that killed 50 people.

"The Home Secretary has boosted funding for next year’s places of worship protective security to £1.6 million [$2.1 million] to reassure communities and safeguard mosques and other places of worship. This is double the amount awarded last year," the statement says.

‘Everybody Was Shocked’: New Zealand Unites to Overcome Christchurch Massacre
The Home Office, which is responsible for a number of issues, including the ones linked to security and counterterrorism, also announced that an extra 5 million pound fund "will be opened to provide security training."

The increase in funding on security in the places of worship in the United Kingdom comes days after the terrorist attack in Christchurch, the largest city on the South Island, that left 50 people dead and another 50 injured.

According to Home Secretary Sajid Javid, the events in New Zealand are "a direct attack on the values of tolerance" and "freedom of worship."

"I know many Muslim communities are feeling vulnerable and anxious. But they should seek comfort from knowing we are doing everything to tackle hate and extremism. That’s why we are doubling next year’s places of worship fund — providing physical protection as well as peace of mind," he continued.

New Zealand is slowly recovering from the events of last Friday which the country's Prime Minister Jacinda Ardern dubbed as the "darkest day" of the island nation. Back then two mass shootings broke out at Al Noor Mosque and the Linwood Islamic Center in Christchurch.

Police have already detained the attack suspect, identified as Brenton Tarrant, a 28-year-old Australian national and a resident of New Zealand's Dunedin city. In his manifesto, which he e-mailed several people, including Ardern, minutes before the tragedy, he expresses a strong anti-Muslim and anti-migrant sentiment.