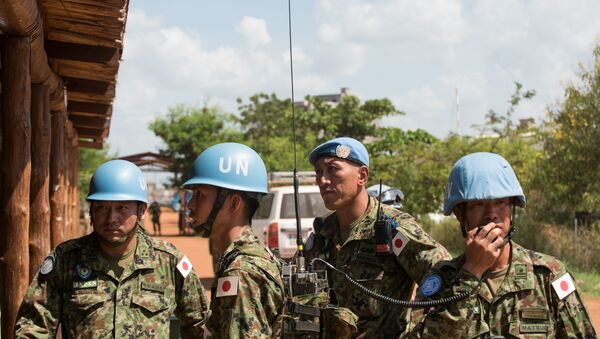 UNITED NATIONS (Sputnik) - A resolution to extend for a year the United Nations Mission in South Sudan (UNMISS) has been adopted, French Deputy Permanent Representative to the United Nations Anne Gueguen said during a UN Security Council meeting.

"The result of the vote is as follows: 14 votes in favor, no votes against, one abstention", Gueguen said on Friday. "The draft resolution has been adopted as resolution 2459 of 2019". According to the text of the US-sponsored resolution, the United Nations will extend the presence of its good offices in South Sudan for another year to ensure peace and stability in the country.

Russia abstained from voting on the extension of the mandate arguing that the text of the document undermines the importance of the Khartoum agreements while prioritizing other issues.

CIA Funds Political Instability in South Sudan - Analyst
"We are concerned that the document, which is supposed to clearly outline the mandate of peacekeepers, is overburdened with formulations and wording on gender issues and human rights", Russian First Deputy Permanent Representative to the United Nations Dmitry Polyanskiy said. "The latter is placed higher in tasks of the mission than the implementation of the peace agreement."

Last year, South Sudan’s President Salva Kiir signed the peace agreement in the Sudanese capital of Khartoum with the former vice-president and rebel leader Riek Machar to end the civil war that has claimed thousands of lives and displaced millions of people since the beginning of the conflict.