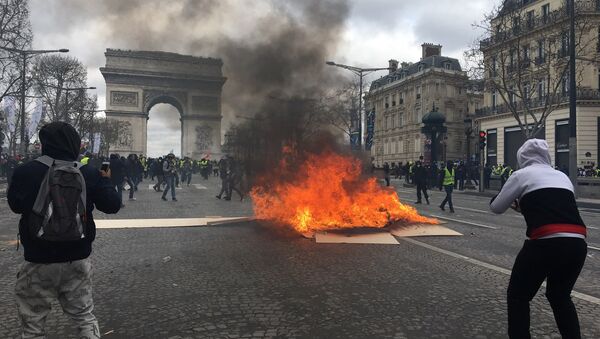 The Parisian establishments that fell victim of the protesters’ anger today include the Fouquet’s restaurant, a Hugo Boss menswear store and a Banque Tarneaud branch, along with several other venues.

Several premises on the Champs-Elysees avenue in Paris were ransacked and looted as France endures its 18th consecutive week of so-called Yellow Vests protests.

One of the vandalised venues was the high-end Fouquet’s restaurant, where protesters torched its canvas awning.

​Another was a Hugo Boss menswear store.

​The mob also set fire to a Banque Tarneaud branch office where the responding firefighters managed to rescue two people who were trapped in the building, with eleven sustaining minor injuries, according to the fire department.

The police arrested over 150 amid the looting and clashes between law enforcement officers and protesters.

#Update: Police in #Paris are also getting aggressive and start beating everyone they can see in their path, as they are sick and tired of the 18th weekend of #GiletsJaunes protests around the country. #ActesXVIII pic.twitter.com/bHl1N1mfgi

​Commenting on the ongoing protests, French Prime Minister Edouard Philippe insisted that there are about “several hundred, several thousand in some cases, highly determined people who are there to create disorder", and that the authorities will strive to bring the perpetrators to justice.

According to the French Interior Ministry’s estimates, about 10,000 people took part in the protests in Paris today, as compared to the estimated 2,800 protesters last Saturday.

The Yellow Vests protests started in France in mid-November last year, with the protesters rallying every Saturday since then.

While the government abandoned its plans to raise fuel taxes, which triggered the rallies in the first place, and introduced other measures to improve the country's socioeconomic situation, protests have continued to rock the country for eighteen weeks straight now.