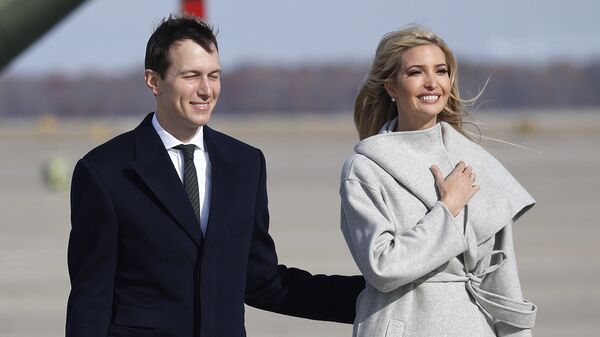 Jared Kushner and Ivanka Trump are volunteering as senior advisers to Donald Trump, which some critics say circumvents federal restrictions on the employment of relatives.

A Democratic congresswoman is pushing for legislation that would fine Jared Kushner and Ivanka Trump $1,000 a day for the alleged violation of anti-nepotism laws.

The bill was introduced by Rep. Jackie Speier from California and is titled Restoring Integrity, Governance, Honesty, and Transparency Act of 2019  (RIGHT Act 2019).

It mandates those who volunteer in the White House to pay a $1,000-a-day fine for each day they work in breach of anti-nepotism regulation. A fine of the same size would also apply to the officials related to such wrongdoers, who employ them or advocate for their employment.

If this bill passes Congress, such employees will be stripped of access to classified information as well.

The proposal appears to be directly targeted at the US president's daughter, Ivanka Trump, and her husband Jared Kushner, who have been volunteering as Trump's senior advisers since he took office.

On Tuesday, Jackie Speier appeared on MSNBC's talk show Hardball. "This is a president who abuses power," she said of Donald Trump, adding that he "thinks this is a game".

"So what does this president do?" she continued. "He decides, well, he's going to make his two — his daughter and son-in-law volunteers, so they won't be subject to the nepotism law."

"Our country's status is at risk. Our national security is at risk," Speier concluded.

Similar concerns were raised in January 2017 when the two had just taken office. The Justice Department, however, stated that the POTUS "enjoys an unusual degree of freedom" in picking his personal staff and is eligible to sidestep federal restrictions.

Earlier in March, Democratic lawmakers called for a criminal investigation into Jared Kushner in the wake of reports that Donald Trump ordered intelligence officials to give him a top secret security clearance.

And last February, mainstream media in the US dwelled on allegations that officials from Mexico, Israel, China and the UAE discussed ways they could "manipulate" Jared Kushner.