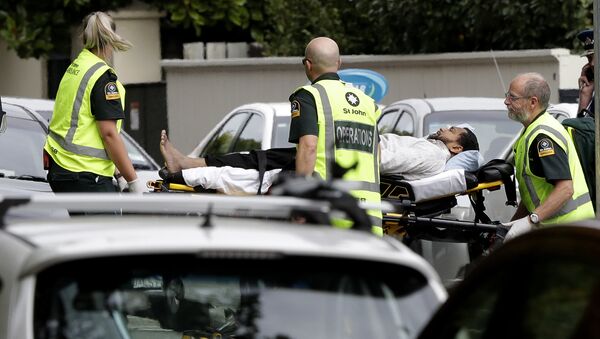 © AP Photo / Mark Baker
Subscribe
International
India
Africa
The viewers of the stream could watch the entire shooting online from beginning to the very end.

The man who killed or injured tens of people in a mosque in New Zealand has been streaming the shooting for 17 minutes, New Zealand Herald reported Friday.

The livestream began as the alleged shooter, a 28-year old Australian-born man who identified himself as Brenton Tarrant drove to the Al Noor Mosque in Christchurch and parked his car, the report says. Multiple weapons and a stash of ammunition were reportedly filmed on the video, along with petrol canisters.

​The viewers of the stream could watch as he armed himself, walked into the mosque and started shooting indiscriminately. He stood in the doorway, blocking people inside from escaping, Herald reports.

I was terrified to see the cold blooded killer #BrentonTarrant's live video. The hatred he posses towards the #Muslims and other races is unbelievable. I think #Bangladesh #Cricket Team is extremely lucky to escape this brutal killing. #Christchurch pic.twitter.com/2aHywJ1rdB

Asia
New Zealand Police Arrest Suspect After Mass Mosque Shooting in Christchurch
After shooting all the ammunition he had on himself, 'Tarrant' walked out to his car to get some more bullets from the boot.

Then, he went back to the mosque looking for survivors and shooting people lying on the ground motionless. As the man left the mosque, he shot a woman on the street.

The video then shows the shooter sitting back into the car and driving away. One vehicle that nearly pulled into his path was fired at several times with a shotgun. The 17-minute video ends with the shooter driving away at full speed. The stream has not been interrupted for the entirety of the shooting.

​Prior to the shooting, the man uploaded a lengthy 73-pages 'manifesto' explaining in details why he commited his atrocity, according to media reports.

The shooting took place around 01:40 p.m. local time on Friday; 40 to 50 people were reported injured, at least 27 reported dead, the exact amount of killed remains unknown. The police reported they have a suspect in custody.