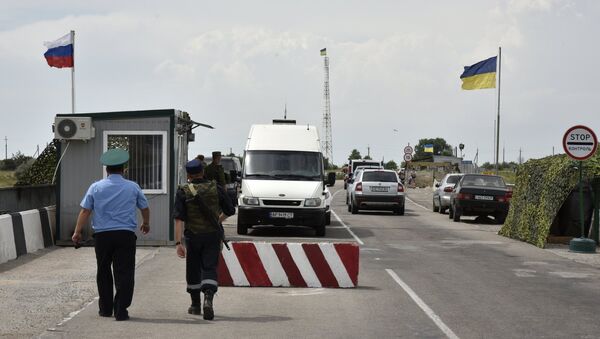 KIEV (Sputnik) - Ukrainian border officers have barred a journalist with Russian citizenship, who works for a Canadian broadcaster and has been accredited by the Ukrainian Central Election Commission from entering the country due to his previous visit to Crimea, according to the Ukrainian State Border Guard Service.

"Since the intensification of the arrivals of accredited journalists [in Ukraine], border guard officers have not allowed one journalist, a Russian citizen, who represented a Canadian television company, to cross the border," the spokesman for the Ukrainian State Border Guard Service, Oleg Slobodyan said on Thursday, adding that the reason behind the ban was the previous visit of the journalist to Crimea, which Ukraine considers its territory.

Slobodyan, who did not disclose the name of the television channel where the journalist worked, noted that a three-year entry ban had been imposed on the media worker.

Russia
French Lawmaker Praises Crimea's 'Breakthrough' Since Reunification With Russia
Crimea rejoined Russia in March 2014 after 97 percent of those participating in a regional referendum voted for the reunification. However, the international community refuses to recognize the legitimacy of the referendum. Moscow, in turn, has repeatedly stated that the referendum was held in accordance with international law and was legitimate, stressing that Crimean residents voluntarily chose to rejoin Russia.

Ukraine still considers Crimea a "temporarily occupied" part of its territory. Last November, Kiev prohibited all foreign citizens from entering Crimea, saying that only those with Ukrainian passports were allowed into the peninsula.

The presidential election in Ukraine is scheduled to take place on 31 March.