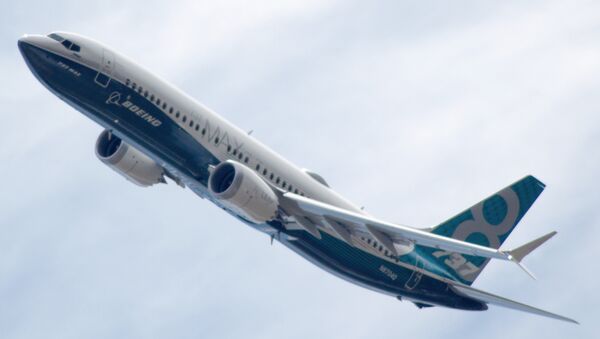 MOSCOW (Sputnik), Valentina Shvartsman – Boeing, the world's largest aerospace company, is facing tremendous pressure, a possible legal action and substantial losses in revenue after its flagship 737 MAX aircraft has been grounded around the world, including the United States, after the weekend crash of a plane of the same model in Ethiopia.

An Ethiopian Airlines’ Boeing 737 MAX crashed minutes after its departure from Addis Ababa on Sunday. All 157 people on board the plane were killed. Another Boeing 737 MAX of Indonesia's Lion Air crashed in October, claiming lives of 189 people.

The latest catastrophe in Ethiopia is the second fatal incident involving a narrow-body aircraft in less than five months. In late October 2018, another Boeing 737 MAX 8, operated by Indonesia's Lion Air, plunged into the Java Sea shortly after take-off, claiming the lives of 189 people.

After Mounting Pressure, Trump Forced To Ground Boeing 737 MAX 8 & 9 Jets
In the aftermath of the tragic catastrophe, the 737 MAX has been grounded and banned from entering the aerospace almost globally. After dozens of countries halted flights of a potentially dangerous aircraft on Tuesday, all eyes were turned to the United States, where American, United and Southwest airlines have a fleet of combined 72 MAX aircraft.

After Canada, other major holdouts in allowing the 737 Max planes to continue flying, grounded the aircraft on Wednesday citing new data potentially linking the Indonesian and Ethiopian crashes, US President Donald Trump announced he had also banned Boeing 737 Max from the US airspace.

Boeing has vowed to cooperate with the investigators and to release software updates for the aircraft by April. The company said in a statement that it had "full confidence" in the safety of its 737 MAX aircraft but supported the decision to temporarily ground the entire fleet of 737 MAX 8 and 737 MAX 9 planes in the wake of the deadly crash in Ethiopia.

"The fact that the US carriers agreed after being so adamant suggests pressure from the insurance industry or that ICAO was finally going to ban internationally," Hansford told Sputnik.

Global bans of the aircraft continued on Thursday, with Japan and Tunisia.

The decision to ground Boeing 737 MAX jets in the United States was welcomed by the Association of Professional Flight Attendants (APFA), representing over 27,000 flight attendants at American Airlines.

"We are relieved that the United States Government grounded the plane. We were very concerned about the safety of our crews and passengers and believe this was the right move to make until a thorough investigation can be conducted," APFA President Lori Bassani told Sputnik.

Association of Flight Attendants, a part of the Communications Workers of America (CWA) representing nearly 50,000 flight attendants in the country, also praised the move that would help the 737 MAX "now get the focus it needs to address the concerns of undetermined safety issues."

Yet another major aviation union, the Transport Workers Union (TWU) that represents 150,000 industry workers across the United States, urged for an inquiry into the reason why US aviation authorities and airlines "dragged their feet" on grounding potentially dangerous aircraft.

"They put profits over people and the American people deserve answers," the TWU said on Twitter.

At the same time, a union representing some 15,000 US pilots – people whose job is directly affected by possible malfunction – reiterated their confidence in the aircraft's safety, though supporting cautiousness of the US aviation authorities.

"We stand by the statement we issued yesterday evening regarding our confidence in the aircraft and in our members' ability to safely fly it, but just as Boeing has stated, we concur with the FAA's reasoning. We want passengers to know that their safety will always be our first priority," Allied Pilots Association (APA) President Capt. Daniel F. Carey said in a statement.

However, media reports emerged after the Ethiopia crash saying that US pilots have filed complaints about the plane's technical through a federal register. In particular, pilots, who reported two incidents when the aircraft would abruptly nosedive in the autopilot mode after take-off. They also complained about insufficient training in flying the aircraft with one of the most sophisticated control systems and inadequate operations manual.

Though the investigation into both recent crashes of Boeing 737 MAX still continues, erroneous readings from the aircraft's angle-of-attack sensor, which triggered a control system to push the nose of the plane down to prevent stalling, are considered among possible reasons for the Lion Air crash. The FAA announced on Wednesday that it had discovered "some similarities" in both crashes.

Hansford stressed that if the findings from the Ethiopian black boxes would be similar to those of Lion Air, it would lead not only to the total grounding of the aircraft, but also higher requirements for minimum skill levels of pilots to fly the aircraft and adequately operate its control systems.

"The first officer on Ethiopian only had 200 hours, which is a joke. Captain by world standards was only basically qualified and the only captain for 16 months on most technically challenging aircraft," he stressed.

As more and more countries are joining the global ban on flights by Boeing 737 MAX, Norwegian Air and India’s SpiceJet have already announced that they will seek compensation from Boeing over disruption caused to their operations.

"US airlines can request competition for lost revenue, if it is proven it was the aircraft's fault," Aimer said.

Hansford echoed his views, pointing out that the United States was "the home of litigation and class actions."

"I believe compensation liability already exceeds $5 billion and now with US fleet grounded it will skyrocket. [The situation around Boeing 737 MAX] could impair launch of new and updated models and could bring Boeing to its knees if not fixed in months with the April 1operational and management changes," he pointed out.

In turn, Harsh Vardhan, a senior aviation expert at the Starair Consulting, told Sputnik that not only the aircraft operators, but the families of those the Ethiopia plane crash victims may press legal charges against Boeing if a technical flaw was proven to have caused the tragedies."

Hansford agreed, noting that while first cases would come from those who lost beloved ones in the LionAir crash, the second crash in Ethiopia would entail "far larger claims due to high numbers of Europeans killed."

Having some 5,000 MAXs on order, one of the world’s largest aircraft manufacturers is now facing huge losses in its revenue if the investigation finds a system flaw responsible for the tragic loss of some 350 lives. With Garuda Indonesia air carrier, which previously ordered 20 Boeing’s flagship 737 MAXs, recently admitting the possibility of cancelling the deal, many others may follow suit as the investigation unfolds.

"[The situation around the crashes in Indonesia and Ethiopia] has the potential to bring it down and wipe out share value as 737 is 30% by value of order book," Hansford said.

Aimer also pointed out to potentially disastrous consequences for the company that hoped to make its MAX aircraft a worldwide standard.

"Boeing will suffer greatly if it is proven the new MAX has stability issues," Aimer said.

"Few companies recover from an incident like this with a new product … Anything they sell now will have the margin squeezed," Hansford echoed.

The expert noted, however, that it was not the first time the FAA grounded Boeing aircraft, pointing out to the decision to halt flights of Dreamliner 787 in 2013 after electrical fires that happened on Japanese airlines due to problems with lithium-ion batteries.

In the short run, cancellations or deferment of orders for MAX jets would lead to cuts in the workforce at Boeing plants and parts vendors, particularly, at the CFM engine maker, he added.