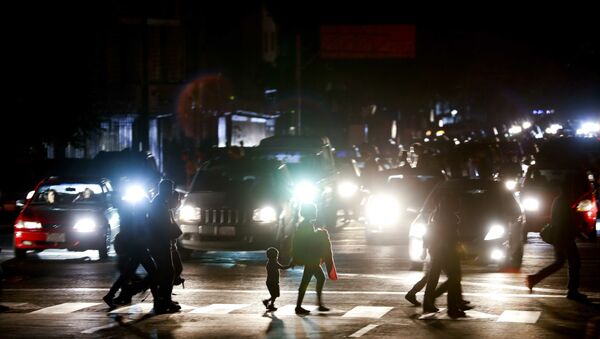 A massive power outage at the Guri Dam in Venezuela caused 18 of the country’s 23 states to go dark on Thursday, bringing life to a halt. Caracas has alleged it’s the work of Washington, where key politicos seemed to know about the attack almost as it happened. An activist told Sputnik it’s the “first act in a new play” of regime change.

While electricity is slowly being restored across Venezuela on Friday, the government of President Nicolas Maduro distributed portable electric generators to keep hospitals, clinics and other essential facilities operating, as well as public places like markets.

US Orchestrating Venezuelan Crisis to Say ‘Look How Socialism’s Failed’

Venezuelan Vice President Dulcy Rodriguez pointed the finger firmly at Washington, which since January 23 has backed the self-proclaimed interim president of Venezuela, a parliamentarian named Juan Guaido, as the legitimate leader of the country, seeking Maduro's ouster. She noted that only three minutes after the blackout began, US Senator Marco Rubio (R-FL) tweeted about it, gloating that the "Maduro regime is a complete disaster."

ALERT: Reports of a complete power outage all across #Venezuela at this moment.

18 of 23 states & the capital district are currently facing complete blackouts.

​"The electric war announced and directed by US imperialism against our people will be defeated," Maduro said on Twitter, adding, "Nothing and no one will be able to defeat the people of Bolivar and Chavez. Maximum unity of the patriots!" Rodriguez also praised the country's electrical sector workers for restoring power as quickly as possible.

The site of the alleged attack was the Guri hydroelectric power station, a gigantic dam on the Caroni River in Orinoco state that produces 10,200 megawatts of power per day: 73 percent of the country's electrical needs. Guri is the world's third-largest hydroelectric dam.

Operated by the state-owned National Electric Power Corporation (Corpoelec), the dam was finished in 1986 and formed part of the government's strategy of maximizing fossil fuel exports by making the country minimally dependent on oil for producing electricity, according to Power Technology. However, under Maduro's predecessor, Venezuelan President Hugo Chavez, the government tried to reduce this dependency on both hydroelectric power and oil exports, encouraging private homes and public structures such as shopping malls and government buildings to provide their own power sources.

"Guri has faced sabotage… It is a part of an electric war against the state. We will not allow this! We are working to restore power supply," Corpoelec tweeted on Thursday.

Chuck Kaufman, the national co-coordinator of the Alliance for Global Justice, told Radio Sputnik's Loud and Clear Friday that this could signal the beginning of a Nicaragua-style contra war in the country.

​"We have to treat this with the utmost seriousness," Kaufman said. "We don't know, of course, what the facts are, but in any kind of military maneuver, cutting off the enemy's lines of communications is the first priority of a military action. The US has been very clear that it intends to remove the Maduro government by whatever means necessary, so we have to be hyper-alert right now."

Kaufman said this was "the first act in the next play" of Washington's strategy of regime change in Venezuela. "Since they did fail to get the Venezuelan military to turn traitor, then what's left, to the US? What's left is low-intensity warfare, another cultural war, so to speak, with attacks from outside of Venezuela and from within Venezuela by agents of the United States government."

"The fake coup is defeated," Kaufman said, noting that Guiado has failed to deliver on any of his promises. "He has no basis for any kind of claim that he's the interim president at this point, so they have to move on to a new tactic."

What Kaufman said he expects now is something more like what happened in Nicaragua in the 1980s. "With the overthrow of the US-backed Somoza dictatorship in 1979, and then when [US President] Ronald Reagan came into office [in 1980], the CIA began training the former military of the Somoza regime, who had escaped across the border into Honduras and Costa Rica, and they became known as the Contras. They were an armed military terrorist group that killed teachers and health care workers and burned down schools and attacked cooperates and did a reign of terror for 10 years."

Indeed, US President Donald Trump's appointed special envoy to Venezuela, Elliott Abrams, played a key role in facilitating US support for the Contras and other, similar right-wing paramilitaries, Sputnik has reported.

Kaufman warned the purpose of this strategy is to wear the population down. "In Nicaragua in 1990, Nicaraguans voted the Sandinistas out of office."

As for Rubio's behavior, which has included not only effectively live-tweeting the entire coup attempt but also a thinly veiled death threat to Maduro in the form of pictures of Libyan leader Muammar Gaddafi's bloody corpse, Kaufman said the Florida senator is "at least guilty of impeachable offenses. It's just outrageous what he's saying and getting away with. But when you look at the Trump administration, they're all saying stuff like that."

Kaufman noted, for example, a tweet by US National Security Adviser John Bolton on February 9 that, seemingly snarkily, said "the lights are going off on the Maduro mafia in Venezuela." In light of recent events, this statement seems like an example of Chekhov's gun.

The lights are going off on the Maduro mafia in Venezuela… https://t.co/SU9QONDY8E

​One is reminded of the Israeli-Egyptian War of Attrition that followed the 1967 Six-Day War. To humiliate and demoralize Egyptian forces, the Israel Defense Forces staged airborne attacks on power stations and other infrastructure in Egypt. The most notorious attack was Operation Shock in October 1968, when helicopter-borne Israeli troopers attacked and blew up a bridge, a dam and several power stations along the River Nile, plunging Cairo into darkness and forcing Egyptian President Gamel abd al-Nasser to call off attacks on Israeli fortifications near the Suez Canal.

Another example, cited by host John Kiriakou, was that of Iraq during the Persian Gulf conflict, during which the US repeatedly attacked Iraq's power stations. He noted the infamous phrase used by US Air Force general Curtis LeMay during the Vietnam War, when the US waged a similar campaign against the North Vietnamese capital of Hanoi, in which LeMay said the US would "bomb them back to the Stone Age."

"A population can get worn down to where they think, ‘Well anything has to be better than what's happening to us now,'" Kaufman said. "It's a tried-and-true tactic. They don't usually try new tactics because they have a playbook that works for them."