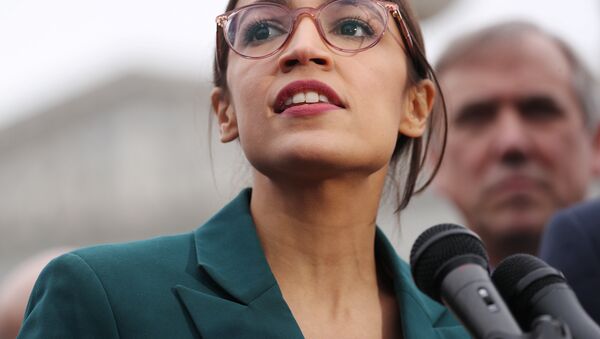 Sputnik: Obviously, you've used some strong words to express your opinion with regard to the Green New Deal. What are your main objections against it?

Patrick Moor: I suppose my main objection is the effective elimination of 80 percent of the world's energy would likely eliminate 80 percent of the world's people in the end. I mean, just growing food, for example — how would we grow food for the world's people without tractors and trucks, and all of the other machinery that is required to deliver food, especially to the inner cities of large centres like Moscow, Shanghai and New York City? How would we get the food to the stores? It's symptomatic of the fact that people who live in cities just take it for granted that this food appears there for them in supermarkets in great variety, healthy food to keep them alive when they couldn't possibly grow it for themselves with such dense populations. And if, in fact, fossil fuels were banned, agricultural productivity would fall dramatically and people would starve by the millions. So, that is just a little bit of why I think it's a ridiculous proposal.

Sputnik: It's very strange where she got that mindset from and this particular equation that this is going to affect the globe beneficially. Why in your view is Ocasio-Cortez pushing for this proposal? Are Americans generally aware of the dangers that it represents? Is it just that she is totally out of touch?

Patrick Moor: I think a lot of people are out of touch in modern society. As I said, people just take it for granted. And we need air to breathe, water to drink, we need food to eat, and we need energy to run the whole civilisation. The food and energy part is really critical. It's easy enough to breathe if the air is clean enough because it's right there for you, there is water in every stream and we've managed to build infrastructure to get it to people fairly easily.

So, those two things are not so hard to look after, and they don't take that much energy, but food production and the production of all of our civilization's needs, especially the big infrastructure of our cities and all of the transportation systems all require a tremendous amount of energy, both in their construction and in their operation. Between buildings and transportation, this amounts to at least 75 percent of all the energy that is used in the world, particularly for transportation.

More than 90 percent of all transportation is based on fossil fuels, particularly petroleum or oil, and oil is, indeed, the largest amount of energy of any single source that we use in our daily lives. So, people need to educate themselves about these things because if they are taken in by this Green New Deal […] The truth is, AOC is not behind this, she is the front person for it, she is very attractive, she's fairly well-spoken, but she doesn't know anything about these subjects in particular, she was a bartender before she became a member of Congress.

The Sunrise Movement is behind her, and I have yet to understand who created this movement, because it has offices all across the United States, there's obviously a fairly big budget for it. It's mostly very young people, it's almost like the Occupy movement has reinvented itself. So, I think what we really have to do is find out who is behind this, because someone is behind it, this is not her idea alone, she is just the front person speaking on behalf of this crazy idea.

Ocasio-Cortez Schools Ivanka for 'People Want to Work for What They Get' Comment
READ MORE: Ocasio-Cortez Riles Up Twitter With 'Racist Tropes' Talk Amid Omar Controversy

Sputnik: I'm sure that is the case. What alternative to this deal have yourselves come up with? Perhaps, you can elaborate on what the alternative is and what you would like globalists to look at in terms of a strategic policy that's going to really add value to the world and sustainability moving forward?

Patrick Moor: The alternative is largely to continue as we are because the decisions that have been made to continue as we are have been based on what the best thing to do is. The real problem is [that] you've got this ridiculous notion that carbon dioxide is causing a global catastrophe and a global crisis, and as AOC says, the world is going to end in 12 years if we don't stop using fossil fuels. It's not about the fossil fuels themselves, it's about the carbon dioxide which is emitted when they are burned, the same carbon dioxide that was taken out of the air to make the plants that made the coal, oil and gas which was deposited in the earth in the first place.

That's one thing that people don't realise: that all the CO2 that is being emitted from burning fossil fuels today was once in the atmosphere and has been taken out, and over the millennia CO2 levels in the atmosphere have constantly been declining. They just ignore this. Those numbers are available, all you have to do is be a good researcher on Google and on the Internet and you can see that over the millions of years CO2 has constantly declined.