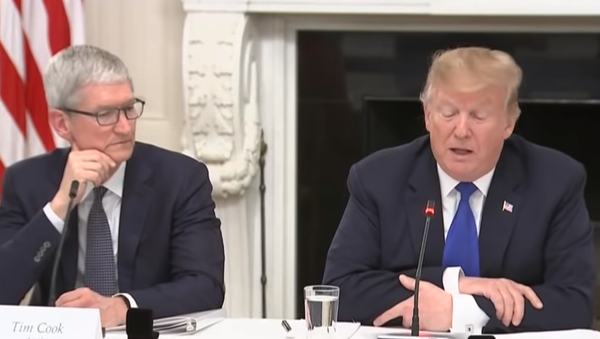 During a Wednesday meeting (can we call it a gala?) with the CEO of tech giant Apple Tim Cook and some of his advisers, US President Donald Trump referred to Cook as “Tim Apple.” While the world is quite used to Trump tripping over people’s names, for Twitter, some things never get old.

Trump was trying to thank Cook for investing in the US when he said that "we appreciate it very much, Tim Apple," but, well, it came out wrong, and now we can add the Apple CEO to the long, illustrious list of people's names the head of state has mashed.

Trump Calls 'Crooked' Hillary Clinton 'Worst and Biggest Loser of all Time'
​"We're going to open up the labor forces because we have to. We have so many companies coming in. People like Tim, you're expanding all over and doing things that I really wanted you to right from the beginning," Trump said before the mixup.

It's nowhere near the first time Trump has done this, either. Comedy Central's "The Daily Show" compiled a list of some of the funnier examples, which includes Lockheed Martin CEO Marillyn Hewson, whom Trump called Marillyn Lockheed. Another favorite is Amazon owner Jeff Bezos, whom Trump has called Jeff Bozo — although that one might not be a mistake…

​Naturally, Twitter juiced Trump for this slip-up. There was no contest; it was a real one-cider.

Legally changing my name to Tim Apple to become the CEO of Apple. pic.twitter.com/3uCiTc5ZhB

​Some people focused on the name brand aspect, assuming Trump just thought everybody names their products and their companies after themselves.

​Should we be surprised, really? This is the man who said his name is literally his brand, after all.

I guess Trump is enough of an egotistical maniac that he just figures everybody's name is their brand since his is https://t.co/fSjpkIHxb3

​Or perhaps, like a popular fan theory about British secret agent James Bond, every person who takes over as Apple's CEO changes their surname to "Apple?"

​But then again, maybe that's why Trump reportedly "disappeared" his school transcripts — could there have been a sour scandal?

No wonder Trump made sure his school records went missing. #LowIQ https://t.co/fjrdqmmNLu

​Other people wondered if Trump was going to start taking requests:

I want to hear Trump refer to Susan Wojcicki as "Susan Youtube" in a conversation with her. That would make my day.

​But hey, Trump's under a lot of pressure. Maybe we'd all come unpeeled in his spot, too?