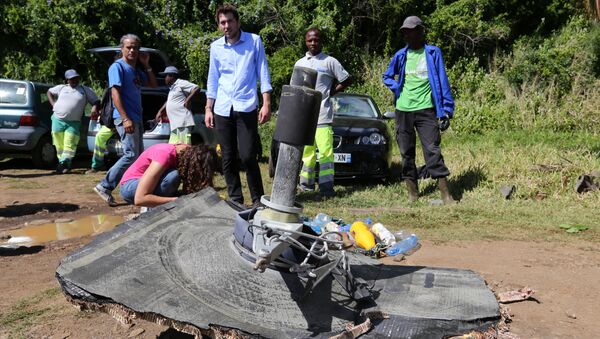 A wreck hunter said that his friend was assassinated shortly after presenting pieces of the Boeing's debris to Malaysian authorities.

Blaine Gibson, a lawyer and an amateur investigator who has been searching for MH370 wreckage in the Indian Ocean, said that two pieces of washed-up aircraft debris, which were later confirmed to be from the missing MH370 flight, were handed over to Madagascar authorities on 16 August 2017.

"For the protection of those involved, we decided not to make this report public until the debris was safely delivered to Malaysia," Gibson wrote in his blog.

"However tragic events have intervened. Under the agreement between the two countries, debris is supposed to be collected by Hon. Zahid Raza, the Honorary Malaysian Consul in Madagascar, and delivered by private courier to Malaysia," he said, adding that Zahid Raza was shot dead in Madagascar's capital a week later.

"The debris is still safely in the hands of the Madagascar authorities. However new arrangements must be made for the collection and delivery of debris."

Raza's slaying at that time has raised suspicions as to whether it had anything to do with the transfer of those MH370 parts.

However, French news site Zinfos 974 suggested that Raza's death was linked with his alleged criminal background rather than with the MH370 investigation. He was reported to have been involved in the abduction of several members of Madagascar's Indo-Pakistani community in 2009, and speculation arose that he was killed as revenge.

Over two dozen pieces of debris have been found across the world since the MH370's disappearance in March 2014, but only three wing parts, discovered in Madagascar, have been confirmed to be pieces of the fateful Boeing.

Malaysian authorities and a private US-based firm have conducted a search in the southeastern part of the Indian Ocean where the plane had crashed according to satellite data analysis. These probes ended up finding no traces of the missing aircraft, fuelling numerous conspiracy theories about how and why the plane disappeared.