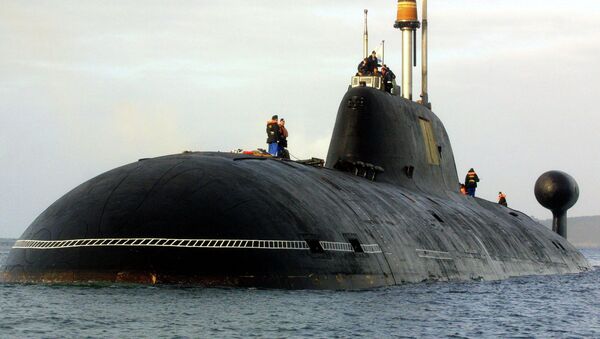 Sources told Sputnik that one of the several incomplete Soviet-era Akula hulls mothballed at the Zvezdochka shipyard in Severodvinsk would undergo a deep refit and rebuild, to be fitted with Indian sensors, operation room electronics, and communication equipment before being delivered to India in or before 2025.

New Delhi (Sputnik): India and Russia are poised to sign an inter-governmental agreement facilitating the Indian Navy to lease another Akula-class nuclear submarine for ten years. The deal is likely to be signed on 7 March 2019, according to an Economic Times report.

The vessel will be ready by 2025 after an extensive building programme on mothballed hulls at a Russian shipyard.

The deal, worth around $3.3 billion, will be the biggest deal since October 2018, when the two countries signed a $5.43 billion deal for five units of S-400 air missile and defence systems.

On 5 December 2018, Sputnik reported that the proposal to acquire another Akula-class submarine had acquired all major clearances from the Indian Defence Ministry after an Indian naval delegation inspected two Akula-class submarines, the Bratsk and the Samara, to select the one to be leased.

Subsequently, during the three-day meeting (18-21 February) of the Indo-Russian Intergovernmental Committee on Military Technical Cooperation (IRIGC-MTC), they discussed the various aspects related to the acquisition in Kochi, India.

The Indian Navy had been negotiating for a second Akula-class submarine for several years. In 2015, however, the service temporarily switched its preference to the more advanced Project 885/885M Yasen-class SSN, one of which was commissioned by the Russian Navy in mid-2014. A further five to seven Yasen-class submarines were on order for the Russian Navy and the Indian Navy wanted its technicians to be involved in their construction.

At present, the Indian Navy has a total of 13 conventional submarines plus one domestically-produced Arihant-class nuclear submarine and one Russian Akula-class submarine on lease. The Indian Defence Ministry believes that more than 24 submarines are needed to counter the growing influence of China in the Indian Ocean Region. The Indian Defence Ministry, on 4 February this year, also approved a P-75I project which is meant to build six conventional submarines at an Indian shipyard with the help of foreign shipbuilders.