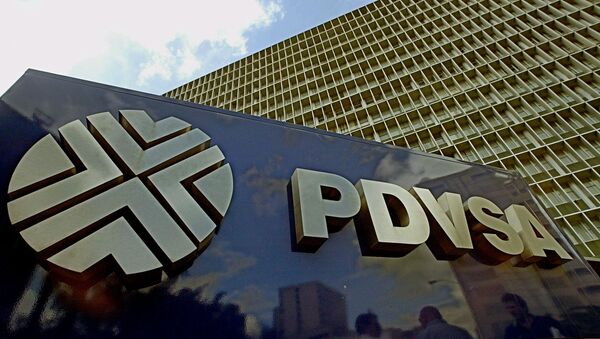 © AFP 2021 / Juan Barreto
Subscribe
MOSCOW (Sputnik) - The US sanctions against Venezuelan state oil company PDVSA will become the main blow to the world's oil refining in the short term, yet it is the US refineries that will bear the brunt in the first place, a monthly outlook by the Skolkovo Energy Center said on Thursday.

According to the outlook, due to the OPEC-non-OPEC oil output cut deal, as well as US reinstated sanctions against Iran and Venezuela, the market is facing a risk of shortage of heavy oil grades, which has already affected their prices. In late January-early February, for instance, in the North American market, the differential between Mars and WTI was $1-1.5 per barrel, while by mid-February it rose to $7 in favor of heavy crude Mars.

"The increase in prices of heavy oil grades affects the amount of a processing margin. The fact is that refineries that are set up to process heavy oil cannot quickly switch to light oil since it would require investment and time. If the world oil refining could still keep up with the growth of production in the United States and the decline in output in the countries of the OPEC-non-OPEC deal, the sanctions against Iran and Venezuela have turned out to be critical," the outlook said.

Meanwhile, many refineries in the Gulf of Mexico depend on imports of heavy oil, including Venezuelan oil.

"In the short term, the sanctions on imports of Venezuelan oil will become the blow to refining, mainly to refining in the United States," the experts concluded.

Venezuelan oil can be replaced by supplies from Canada, Saudi Arabia, Mexico, Iraq and Colombia.

Venezuelan Oil Giant PDVSA to Redirect Exports to Customers in Europe and Asia
However, Mexico is facing a decline in oil production, while the increase in deliveries from Canada depends directly on the pace of expansion of oil pipelines, which means that both countries have limited capacities to boost exports in the short term, according to the experts.

On 28 January, the United States blocked $7 billion in PDVSA assets in its jurisdiction and imposed a ban on deals with the entity as part of efforts to facilitate a power transfer in the crisis-torn Venezuela.

US Treasury Secretary Steven Mnuchin told reporters that by blocking PDVSA assets, the United States was taking care of this company in the interests of the Venezuelan people. Caracas has slammed the move as unlawful and accused Washington of seeking to get its hands on Venezuelan oil reserves.

000000
Popular comments
American has become a bully to small countries such as the federal Presidential republic of Venezuela, without regards to human misery. Corporate american has little regard towards other peoples abroad as profits dictate outcomes regardless the human costs and suffering.