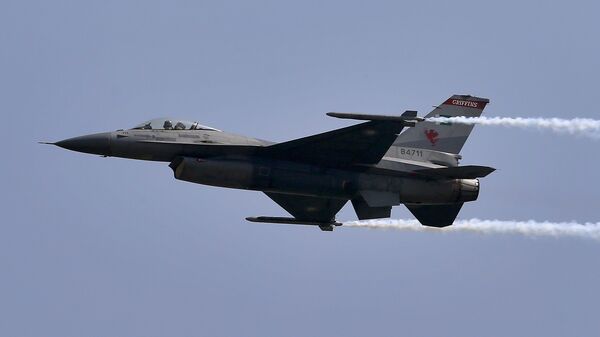 The footage comes as India’s top brass confirmed on Wednesday that a Pakistan Air Force F-16 fighter jet was downed during a dogfight with Indian Air Force (IAF) jets over the Line of Control in Kashmir earlier that day, despite Pakistan's claims that it hadn't lost any aircraft.

Indian journalist Ajay Jandyal has posted a video on Twitter of the alleged dogfight between Indian and Pakistani warplanes over Kashmir which he claims shows the pilot of a Pakistani F-16 jet parachuting to the ground.

The authenticity of the video has not yet been confirmed by India nor Pakistan.

#Exclusive
Now its time when pakistan should admit and share details of its Wing Commander Shahzad-Ud-Din of No 19 Squadron (Sherdils), pilot of the F-16 who was killed in @IAF_MCC action in Nowshera sector LoC#Surgical_Strike_2 pic.twitter.com/FXMGyuBk5m

At the same time, some Twitter users questioned Jandyal’s claims and argued that the footage actually shows the pilot of the downed Indian MiG-21 who was swiftly detained by Pakistan and is due to be released later on Friday.

READ MORE: India is Fighting Against Terrorists, Not Pakistani Citizens or Army – Journo

UN Urges India, Pakistan to De-Escalate Tensions in Disputed Kashmir Region
The video was released amid India’s statement that it is sharing "detailed evidence" with the US that Pakistan scrambled a US-made F-16 fighter jet, which was acquired under a "fight against terror" programme, in the Kashmir air battle.

The statement came as the Indian armed forces displayed what it claims is part of the AMRAAM missile fired from an F-16 which was recovered from Rajouri in Kashmir.

The air battle took place on 27 February after India carried out an airstrike against a Jaish-e-Mohammad training facility in Kashmir. The strike followed India blaming Pakistan for being responsible for the 14 February deadly bombing in Kashmir which killed 40 Indian paramilitary officers.