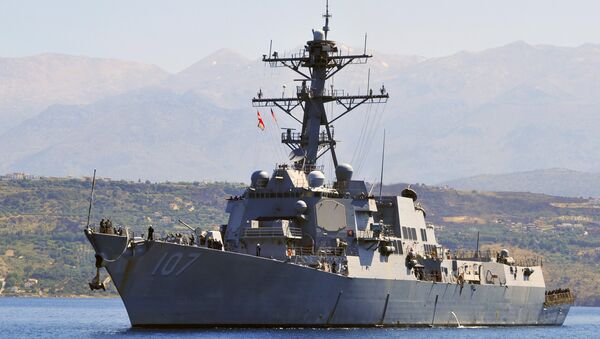 Currently, the destroyer is passing the German coast, and this is the second time since 2009 that USS Gravely arrives in the Baltic Sea.

The Russian National Defense Control Center has reacted to the reports on the missile destroyer USS Gravely's actions in the Baltic Sea, saying that it was closely monitoring the situation.

"On February 26, at 02.00 p.m. Moscow time [11:00 GMT], US Navy destroyer USS Gravely entered the Baltic Sea. The designated forces and means of Russia's Baltic Fleet have been mobilized to carry out continuous monitoring of the American destroyer," the centre said in a statement.

It was earlier reported that the vessel took part in joint drills of NATO ships, according to the Vesti news outlet.

The USS Gravely is the flagship of NATO's Standing Maritime Group 1 in the US 6th Fleet's area of operations, which includes Europe and Africa. It can carry up to 56 Tomahawk cruise missiles.

A similar ship, the USS Donald Cook, is now in the Black Sea. On 25 February it arrived to the port of the Ukrainian city Odessa, following wargames that involved the Turkish frigate TCG Fatih in the Black Sea. According to reports, the destroyer will remain in the port until 27 February. The last time it sailed into the area was at the end of January 2019, spending five days in the port of Batumi, Georgia.