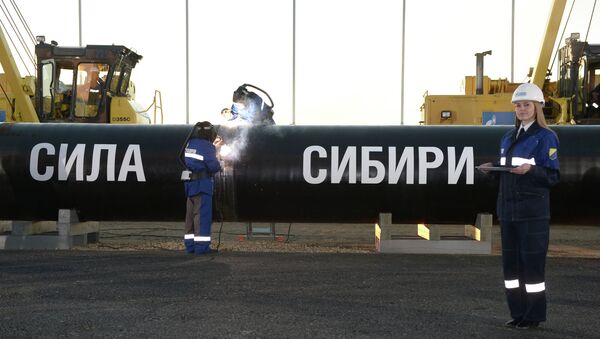 © Sputnik / Aleksey Nikolskyi
/
Go to the mediabank
Subscribe
International
India
Africa
MOSCOW (Sputnik) - Russia's energy giant Gazprom intends to account for more than 25 percent of China's gas imports by 2035 amid growing demand for gas in the country, according to the company's presentation.

"By 2035, demand for gas in China will more than double. The unclear future of the exploitation of unconventional gas reserves creates huge potential for additional gas imports", the presentation said.

Gazprom's share in China's overall gas consumption will reach 13 percent by the same year, the presentation showed. The company's gas supplies to China via the Power of Siberia pipeline are expected to reach their projected capacity of 38 billion cubic meters (1.34 trillion cubic feet) per year by 2025.

In 2014, Gazprom signed a 30-year framework agreement with China National Petroleum Corporation (CNPC) for annual deliveries of 38 billion cubic meters (1.341 trillion cubic feet) of Russian gas through the Power of Siberia pipeline. Gas supplies are reportedly expected to commence by the end of 2019.

Power of Siberia Gas Pipeline to Start Delivering Russian Gas to China in 2020
The pipeline will also transport gas from production centers in Irkutsk and Yakutia to consumers in Russia’s Far East.

In 2015, Gazprom and CNPC signed an agreement on constructing the western route pipeline, known as the Power of Siberia-2. This particular pipeline will reportedly supplement the eastern route — Power of Siberia pipeline — and has a planned annual capacity of 30 billion cubic meters.

Gazprom, CNPC to Hold Series of Meetings on Contract on Western Route - CEO
Last year, Gazprom and CNPC signed an agreement on constructing the western route pipeline, known as the Power of Siberia-2. The pipeline is planned to supplement the eastern route — Power of Siberia pipeline — and has a planned annual capacity of 30 billion cubic meters.

Gazprom Export said last year that Russian energy giant's supply of gas to China, including via western route, would not affect the volume of the company's deliveries to Europe.

Director General of Gazprom Export Elena Burmistrova said Monday that the share of Russia's energy giant Gazprom in the European gas market has increased to an all time high of 36.7 percent in 2018, rising over 2 percent compared to 34.2 percent in 2017.

"In 2018, according to preliminary data, the share of [Gazprom's] gas supplies to the EU countries and Turkey has reached an all-time high and totaled 36.7 percent", Burmistrova said speaking during the Investor Day Presentation.