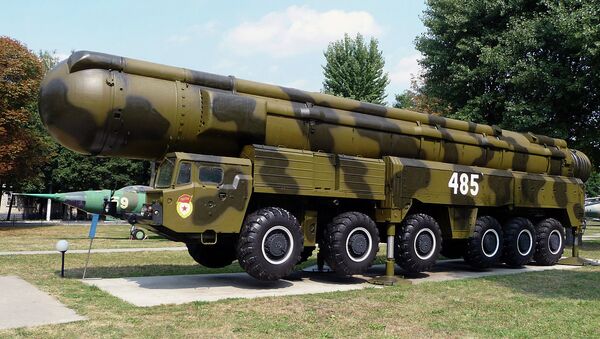 © Wikipedia / George Chernilevsky
Subscribe
Russian President Vladimir Putin earlier warned that Moscow would be "forced" to answer in kind if the US deployed new medium- and short-range missiles in Europe amid its recent withdrawal from the 1987 Intermediate-Range Nuclear Forces (INF) Treaty.

Belarus President Alexander Lukashenko has stated that Minsk together with Moscow will have to think about retaliatory measures if the US places medium and short-range missiles in Europe, and it will be even worse if missiles are placed in Ukraine.

"I am afraid that the Americans will seize the moment, as they have broken this agreement [the Intermediate-Range Nuclear Forces Treaty], and they will deploy missiles in Europe. There will be hell to pay for us. Therefore, we together with Russia will need to think about response measures. You cannot run away from this, if it happens. And it will be worse if these missiles are placed (God forbid, hypothetically) on the territory of Ukraine", Lukashenko said as quoted by the state agency Belta.

Speaking about the potential threat to the security of Belarus, Lukashenko noted that "this is a catastrophe, especially for us". According to him, it is believed that the US withdrawal from the INF Treaty, is aimed against China, which possesses such weapons, but did not participate in the treaty.

Putin: Russia-US INF Tensions 'No Reason to Create New Cuban Missile Crisis'
The United States previously announced that the country had suspended its obligations under the INF Treaty starting from February 2 and would begin the six-month withdrawal process unless Moscow rectified the country's alleged violations of the bilateral arms control deal. That same day, Russian President Vladimir Putin stated that Russia had also suspended its obligations under the treaty in response to the US move.
000000
Popular comments
...........Russia/Belarus have to respond,due to the irresponsible US attitude,in withdrawing from the INF treaty.

vargus
22 February 2019, 14:02 GMT5
000000
Dorado187, well no you dont otherwise you would be aware its a closer direct route to Europe. Plus Russia has dozens of Sammat silos in Belarus. Radar and wall tower radar. Belarus militarily is a powerful nation. All thought after 91 it was neutralized not in the slightest. Belarus is a million times more powerful than Ukraine.