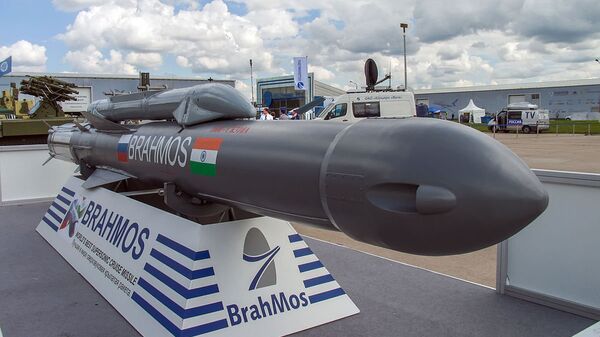 BENGALURU (India) (Sputnik) - The Russian-Indian BrahMos Aerospace arms manufacturer presented at the Aero India exhibition in the Indian city of Bengaluru a prototype of a new-generation air-based BrahMos-NG missile, a Sputnik correspondent reported on Wednesday.

The missile's prototype is attached to a Tejas fighter of the Indian Air Force, according to the correspondent.

Last year, the company said that the BrahMos-NG missile would be created within 3-5 years, adding that Russian MiG-29 fighters may be also equipped with these weapons.

India Setting Up Coastal Battery for BrahMos Missile in Bay of Bengal
Meanwhile, Indian defense scientists successfully validated the life extension test of supersonic cruise missile BrahMos the same year from the Integrated Test Range (ITR) in Chandipur, Odisha. With this test, which according to sources was highly successful despite the extremely strong winds and heavy rain at sea, the lifespan of the missile could be increased to 15 years, from the present lifespan of 10 years.

BrahMos is a joint venture between the Defence Research and Development Organisation (DRDO) of India and NPO Mashinostroyenia of Russia. The first such test was carried out on May 21 this year. BrahMos variants can be launched from land, air, sea and underwater.