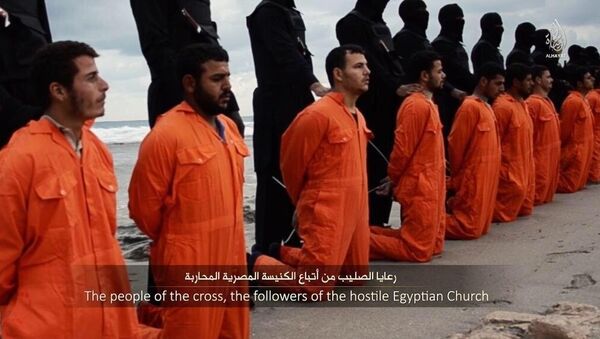 The man’s perfect English caught the world’s attention as early as 2014. Experts speculated at the time that he could have been North American or Canadian and they turned out to be correct.

A Canadian man of Ethiopian descent who immigrated to the North American nation as a child turned out to be the narrator behind numerous Daesh propaganda videos, including those that depict prisoner executions, according to a report by The New York Times.

One of the most notorious Daesh propaganda video shows Syrian prisoners digging their own graves, before allegedly being shot in the back of the head by Daesh.

It is now known that the man with the perfect English-language narration in the horrific videos is Mohammed Khalifa, a 35-year old Canadian citizen who immigrated from Saudi Arabia as a child. During his life in Canada, he learned to speak like a native Canadian, studied technology and worked on modest jobs for various computer companies.

Denmark Rejects US Call to Take Back Daesh Fighters, Germany Notes Legal Issues
Khalifa was captured by Kurdish SDF forces as they advanced on Daesh's last stronghold east of the Euphrates river. He is now detained in a prison in Northern Syria.

Speaking to New York Times, he described himself as a "rank-and-file" employee of the self-proclaimed caliphate's Ministry of Media, a unit tasked with filming and publishing brutal propaganda videos that had the result of attracting new fighters to the terrorists' cause.

After entering Syria in 2013, he worked in a studio in Raqqa — first as a translator, and later as a narrator. Their team received footage filmed in the field and then edited the imagery and recorded voiceover in a well-equipped soundproof room.

However, when airstrikes on Raqqa began, they were forced to abandon their studio base and go on the run from house to house, and then town to town, always aware that their satellite dish would eventually give them away.

US Using Choppers to Transport Syrian Gold Stashed by Daesh – Reports
During their last moments, the unit had some 20 men who worked out of their homes. Khalifa eventually took hold of a weapon himself, only to surrender to the SDF when he ran out of ammo — something in his narratives that he encouraged Daesh members to never do.

The perfect English spoken in Daesh videos attracted the attention of intelligence experts. In 2014, experts speculated that the man in the video could be an Arab, but he was more likely to be a North American or Canadian.

"If he is a North American, this is quite extraordinary, because it would be the first time a North American [Daesh] fighter has committed a war crime on camera," Paul Cruickshank, a terrorism analyst told CNN at the time.

It is unclear what charges Khalifa will face. He denies doing any killing and claims that he was never a participant in any of the videos, instead saying he only provided the English-language voiceover.