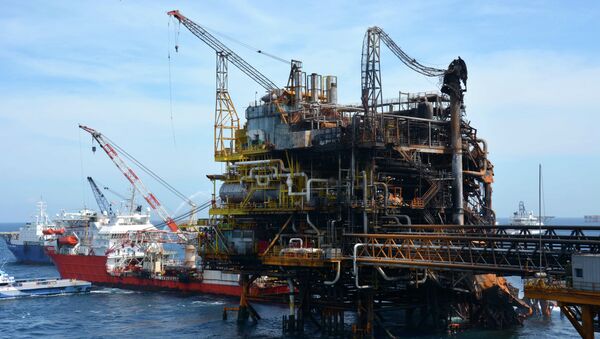 © AP Photo / Pemex
Subscribe
The Mexican government has announced a plan to support the oil company Pemex as it faces investor scepticism over its falling production, rising throughput costs, and rife corruption, which are pushing both the company and the entire country to the edge of non-investment ratings.

In a statement Friday, the Mexican government said it will spend $3.9 bln to improve Pemex' finances and prevent another credit rating cut. The administration of President Andres Manuel Lopez Obrador said the plan would boost Pemex' investment to $14.9 bln, which is 5.5 percent above the previous estimate, while a new round of tax breaks for the company will reduce its taxes by some $4.68 bln.

The Last Narco? El Chapo Joins a Long List of Mexican Cartel Bosses to Face Jail
As part of the plan, Pemex will receive $1.8 bln in pension monetisation. Additionally, the Mexican government has pledged to crack down on corruption at one of its biggest state-run enterprises. Officials also promised Pemex will not increase its leverage this year.

The company's total debt stands at $107 bln, one of the largest among major international oil producers. The UK's BP, Russia's Rosneft, and China's PetroChina all have the debt of roughly $60 bln each, while Brazil's Petrobras, as well as Royal Dutch Shell, owe roughly $80 bln each.

However, economists said Mexico's plan to support Pemex might be insufficient to save the company from "junk" bond ratings.

"The measures are not a long term fix and won't be enough to stabilise oil output", Edward Glossop of Capital Economics said.

Pemex is facing more than $27 bln in debt payments over the coming three years, and experts at Fitch and Moody's pointed to the ongoing deterioration in the company finances and credit quality. Analysts also pointed out that Pemex is facing a threat of continued underinvestment if current trends continue, particularly so, if global oil prices go down.

READ MORE: Mexico's Constitution May Be Changed, Though Not by Current Gov't — President

Additionally, experts said the government's plan, announced Friday, would be unlikely to bring systemic change to Pemex, and the oil giant is expected to remain a low-efficiency company.

"Without outside investment, Pemex must get funding from the government or through debt. There is no other visible source", Guido Chamorro of London-based Pictet Asset Management said.

Pemex' output has dropped over the past few years from 3.5 mln barrels per day (bpd) in the mid-2000s, to roughly 1.75 mln bpd last year. Analysts say a simple cash injection will not reverse the declining production and is unlikely to solve Pemex' structural and organisational problems.

"It seems to me that they are not thinking about the basic problems of Pemex: operational efficiency, the profitability of the projects, investment efficiency", Alejandra Leon of IHS Markit in Mexico City said.

Mexican Military Takes Control of Pemex Facilities - Reports
Adding to the mounting concern, the Pemex trouble could put the entire nation of Mexico on the edge of "junk" credit rating. According to a survey from Bank of America, 70 percent of finance experts say Mexico could lose its investment grade in the upcoming years. Pemex has contributed roughly 20 percent to Mexico's national revenue over the past few years, meaning a decline in the company's profitability could undermine the fiscal sustainability of Mexico.

This as the new Mexican administration has announced ambitious fiscal stimulus measures in many areas, seeking to transform the economy, while also increasing social spending. Economists believe such plans amid rife structural woes could pose a threat to the economic sustainability of Mexico in the longer run.

In this light, Mexican governmental bonds have recently approached "junk" levels, along with Pemex' securities. Experts say there is no quick solution to the brewing crisis.

"The issue is that to provide the scale of support that would be needed to really give Pemex more room to invest and turn around its business, it might require foregoing significant amounts of revenue from the government", Charles Seville of Fitch Ratings said.

Meanwhile, Mexican officials also said Pemex' taxes would go further down in the coming few years, while governmental support will allow the company to meet its debt obligations. The government also pledged "full assistance" to the oil giant if necessary.

But analysts expect a stronger response to the Pemex trouble, saying cash injections and promises to fight corruption are not enough. However, investors appeared to be somewhat reassured following the government's statement of "unconditional support" on Friday.

"It is a good sign that the Lopez Obrador administration recognises that Pemex needs to change profoundly", Wilbur Matthews of Vaquero Global Investment said.