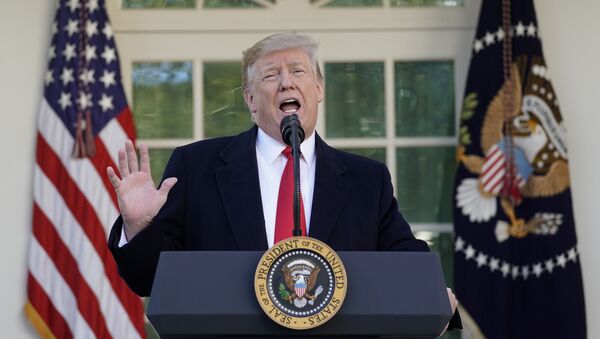 US President Donald Trump has signed a national emergency declaration to fund a border wall on the US-Mexico border.

"President Donald Trump signs the Declaration for a National Emergency to address the national security and humanitarian crisis at the Southern Border," Sanders said via Twitter. Trump also said that he would likely be sued for declaring the national emergency, adding that he would be successful in court.

President @realDonaldTrump signs the Declaration for a National Emergency to address the national security and humanitarian crisis at the Southern Border. pic.twitter.com/0bUhudtwvS

​At the same, acting White House Chief of Staff Mick Mulvaney said that Trump had the authority to bypass Congress in order to secure funds to build the wall.

"It actually presents zero precedent. This is authority is given to the president in law already," Mulvaney told reporters during a press briefing.

By declaring a national emergency, Trump will be able to tap certain Pentagon funds, including its military construction and counter-narcotics budgets.

Another senior administration official said the White House plans to build 243 miles of steel barrier along the border with Mexico.

The day before, NBC News reported that Trump expected to receive up to $8 billion additionally for the construction of the wall on the border with Mexico through declaring a state of emergency.

US President Donald Trump said on Friday that China and the United States are closer than ever before to secure a new trade deal between the world's two largest economies.

"We are working very closely with China and President Xi [Jinping]," Trump said during a press conference at the White House. "We are a lot closer than we ever were in this country with having a real trade deal."

According to Trump, Russia and China have been helping the United States work toward achieving North Korea's denuclearization.

North Korea's potential of becoming an economic power is significant particularly because the country is situated between South Korea, Russia and China, US President Donald Trump said in a press conference on Friday.

"We think that North Korea and Chairman Kim [Jong Un] have tremendous potential as an economic force, and economic power," Trump said. "Their location between South Korea and then Russia, and China, right smack in the middle, it's phenomenal. We think they have a great chance for tremendous economic prosperity in the future."

Trump announced last Friday that the summit would take place in the Vietnamese capital of Hanoi February 27-28.

The US president said he looked forward to meeting with Kim to advance "the cause of peace" as the two leaders discuss the denuclearization of the Korean Peninsula.