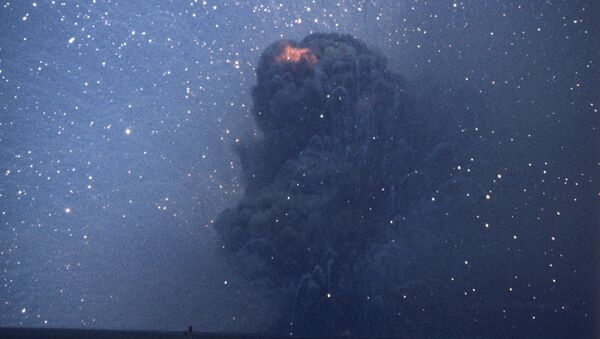 A retired US pilot, who flew a reconnaissance plane during the Cold War, has made a revelation about one of his missions aimed at spying on Soviet ballistic missile launches.

Speaking with The Drive, Veteran Air Force pilot Robert Hopkins has revealed that while he was monitoring tests of the Soviet SS-20 Saber intermediate-range ballistic missile, he and his colleague witnessed what he called a “Dome of Light”.

He said that the phenomenon drew great interest from the US intelligence community, which thought that his RC-135S Cobra Ball missile tracking plane had come across a new secret weapon that could eventually shift the strategic balance between the US and the USSR.

“We noticed what appeared to be a translucent, milky white wall moving from the left, over the USSR, to the right, toward the Northern Pacific Ocean. It covered the entire sky from ground level to as far up as we could see looking out the front windows of the airplane. It moved very quickly—far faster than crossing airplane traffic—and rapidly approached us. The wall of light passed across our flight path and then continued eastward, leaving the empty and dark night sky in its wake”.

Both pilots agreed they were not hallucinating, and that it was something neither of them had ever seen.

“By this time there was official interest in this event, which had now acquired the name ‘Dome of Light’. This accurately described its appearance as a flash of light that began at the SS-20 launch site and then radiated outward in all directions at high speed”.

According to Hopkins, Air Force scientists were unable to explain the origin of the phenomenon: while some suggested it was spurred by special fuel used in the first stage of the SS-20, others assumed that it was something external to the missile’s propulsion system that “provided an initial flash of light designed to temporarily blind US defence warning satellites”.