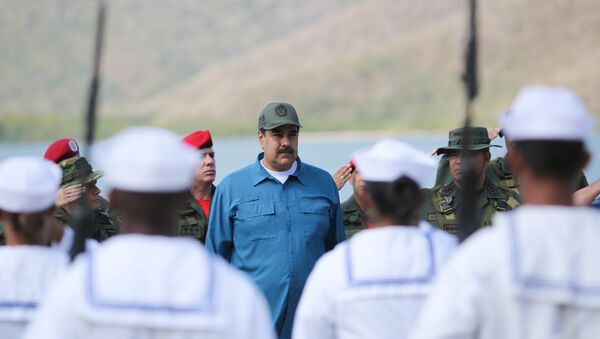 On Monday, European Union nations moved to recognize Juan Guaido as the interim leader of Venezuela, and the Lima Group nations met in Ottawa to discuss their next move against Venezuelan President Nicolas Maduro. However, Venezuelan patriotism sharply opposes foreign intervention, a journalist in the country told Sputnik.

"The eight-day period for convening free democratic and transparent elections in Venezuela has expired. The Kingdom of the Netherlands recognizes Juan Guaido as interim president of Venezuela. We want freedom and democracy to return to Venezuela as soon as possible," Dutch Foreign Minister Stef Blok said Monday. The Netherlands was joined by over a dozen other EU nations in recognizing as Venezuela's leader Guaido, who declared himself interim president during a demonstration on January 23 celebrating the historical end of a military dictatorship in 1958.

A notable voice of dissent was Italy, which reportedly rejected the proposal to back Guaido, Sputnik reported, citing comments made by Deputy Foreign Minister Manlio Di Stefano.

Also on Monday, the Lima Group of 14 Western hemisphere nations met in Ottawa, Canada, to decide their next steps against Maduro. The group, dominated by US foreign policy, was formed in 2017 specifically to facilitate regime change in Venezuela.

However, Maduro and the Bolivarian movement aren't without allies. Regionally, Maduro has been supported by Cuba, Bolivia, Nicaragua, El Salvador and Suriname, as well as the Caribbean island nations of St. Kitts and Nevis, St. Vincent and the Grenadines and Dominica. Mexico, which had initially supported Maduro, has since moved into the neutral camp, with Mexican President Andres Manuel Lopez Obrador rejecting the US-backed coup attempt but offering to be a neutral negotiator between the two sides.

"I think, beyond political divides, and beyond opinion of Nicolas Maduro or his policies and Chavez and everything else, there is an overwhelming sense of national independence here in Venezuela, of patriotism, and of the sense that Venezuelans have to sort out their own affairs," Paul Dobson, a writer with Venezuelanalysis.com, told Radio Sputnik's Loud and Clear Monday.

​"This is, obviously, something which has grown in the last week or so, with the threats instigated by Washington, and particularly those forces who support the government, are currently preparing themselves ideologically, physically, let's say, for any potential battles that may come. I'm not talking necessarily about physical battles; I'm talking about in the means of communication; I'm talking about discussions on the streets, and so on."

"So there is definitely… a rejection of US intervention which goes beyond support for Nicolas Maduro. I think this is an element which will be key in any sort of attempt by the United States to intervene, militarily, in Venezuela."

"I think the economic sanctions will be a lot more hurtful than the diplomatic positions taken by these governments," Dobson told Sputnik. "It's worth remembering that these are measures which are being taken by, in many cases, governments which are themselves embattled and are currently very down in popular support in their own countries. We've seen very interesting statements come out in the last 24 hours from social movements and grassroots groups, especially in France — the Yellow Vests, for example — but also in Britain, in Germany and in Spain, rejecting the position taken by their government."

"And here are the friends, we are in front of the Venezuelan embassy… We come as friends of the Maduro government," said a member of the collective "Yellow Vests Constituents" in a live video broadcast on January 29. "We condemn Mr. Macron, who supports an unelected person," says another.

"The economic measures which these countries may apply to Caracas, it [is] really going to hurt, whether we see any expansion of the oil embargo issued by Washington and other restrictive measures," Dobson told hosts Brian Becker and John Kiriakou.

"Both mobilizations were held in an atmosphere of peace," Dobson said, who reported from the Venezuelan city of Merida. "There were no violent outbreaks reported, which I think is positive for all involved. The pro-government mobilization was extensive; it was extremely large, without a doubt. Obviously very hard to judge numbers specifically, but somewhere around 200,000, between 100-300,000 is a ballpark figure."

​"The opposition mobilization was equally large, of a similar size, you could say, potentially a little bit bigger. It was, however, notably smaller than the march held on January 23, when all of this started with a self-proclamation of Juan Guaido as president."

​"The spirits were very high among the opposition supporters, even if they were slightly lower in numbers. However, we did definitely see — let's say a lack of concrete action taken by Juan Guaido when he spoke to his supporters. Many of his supporters were expecting the announcement of a new cabinet, a new government or potentially the naming of a board for the Citgo oil subsidiary in the United States or a series of other measures. None of this was forthcoming, and his speech essentially involved a series of promises for future actions without any sort of details, leaving some of his supporters a little bit unhappy."

Dobson noted that "an office general," Air Force General Francisco Esteban Yanez Rodriguez, had defected to the opposition on Saturday. He downplayed the importance of this event and dismissed it as "an isolated incident," noting that "he's not a general in charge of any troops. He was in fact in charge of distributing rice in the government-controlled supermarket chain, so the influence of his position over the wider armed forces has to be in question. Whether this sets off some sort of ‘domino effect,' we'll have to see, and this is a worry which the government may have. But in itself, the defection of this general is not a significant act."

Dobson told Sputnik that since January 23, over half of Venezuela's 23 states have held large pro-government demonstrations. Likewise, he noted that on Saturday, "opposition forces held regional rallies in most of the states across the country, which were well-attended, without a doubt."

#InPictures | The Chavista demonstration continues in Apure, western #Venezuela. The president of the Constituent Assembly @dcabellor speaks to thousands of supporters in rejection of foreign intervention. pic.twitter.com/J2YqHhJvpN

​"There is certainly a feeling of what is going on outside of Caracas. We've seen some interesting developments, especially in the border region recently, so the state of Tachira and the state of Zulia. The Tachira state governor, who is an opposition member herself, a fairly extreme right-wing opposition politician, on Saturday made statements suggesting that she had actually been threatened by right-wing forces for not having recognized the presidency of Juan Guaido, suggesting that there are some deep internal divisions between the right-wing forces at the moment in Venezuela."

Dobson also addressed the question of Twitter recently taking down nearly 2,000 Venezuelan accounts last week, which the social media site claimed "appear to be engaged in a state-backed influence campaign targeting domestic audiences," as Sputnik reported at the time. He called it a "blatant example of censorship."

"We see the United States government once again talking about freedom and democracy, and we see United States firms — Twitter is an America-based firm, for anyone who had forgotten — clamping down on the freedom of speech and those who maybe think different to the US government."

Dobson recalled when, in August 2018, Venezuelanalysis.com's Facebook page was "arbitrarily unpublished," allegedly for violating "the company's terms and conditions," according to the media outlet's statement at the time. TeleSUR received similar treatment at the same time — the second instance of that happening to TeleSUR, according to its statement on the event.

"This just reinforces the fact that these companies are in no way independent, they are very much responding to the pressures and interests of the government which controls their financial activities in their home nation," Dobson said.