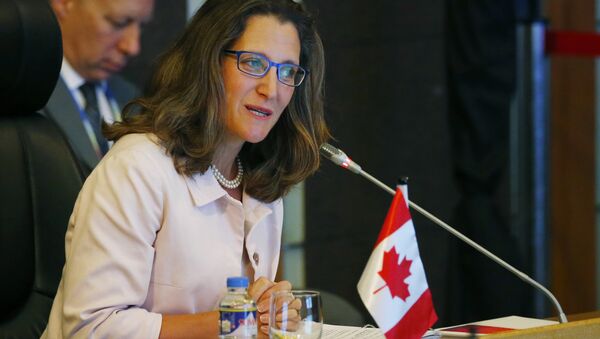 "I read point 17 of our declaration, which talks about the importance of a process of political transition using political and diplomatic means without the use of force or coercion," Freeland told reporters on Monday. "Canada absolutely rules out military intervention."

Facebook Blocks Posting of Cuban Article on Venezuela, Marks it Spam (PHOTOS)
By contrast, US officials have said that all options are on the table regarding the crisis in Venezuela.

Freeland also said that the Lima Group has welcomed Venezuela’s interim government as full member of the bloc.

"We are delighted that the National Assembly and the interim President Juan Guaido on behalf of the Venezuelan people have asked to become members of the Lima Group," Freeland said on Monday. "Today we have taken the important step of welcoming the interim government of Venezuela as a full member of the Lima Group."

Canadian Minister of Foreign Affairs said that the members of the Lima Group will hold their next meeting in Colombia in near future.

"The work of the Lima Group has intensified, and we agreed that we will meet again soon — this time hosted by our friends from Colombia," Freeland told reporters on Monday.

"We did devote a considerable amount of our time today to talking about how the Lima Group and the international community more broadly can support the eventual rebuilding and reconstruction of Venezuela," Freeland told reporters on Monday. "We heard from economic experts, we also heard from representatives of interim President Juan Guaido about the very advanced plans which the opposition has."

Lima Group Agrees to Ban Venezuelan Officials from Entering Members' Territory
The Lima Group will suspend military cooperation with the Venezuelan government of President Nicolas Maduro, the group said in a declaration that it issued after concluding a meeting on the crisis in Venezuela.

On January 23, the leader of the opposition-led Venezuelan National Assembly, Juan Guaido, proclaimed himself an interim president of Venezuela after he contested the results of the election last year in which Maduro was re-elected for a second term.

Canada, the United States and many of their allies, particularly European Union members, have voiced support and recognized Guaido as Venezuela’s interim president.

However, a diplomatic source in Brussels told Sputnik on Monday that Italy had blocked an EU joint statement recognizing Guaido.

Russia, China, Mexico and several other countries have said that Maduro is the legitimate president of Venezuela and demanded that other countries respect the principle of non-interference in Venezuela's internal affairs.