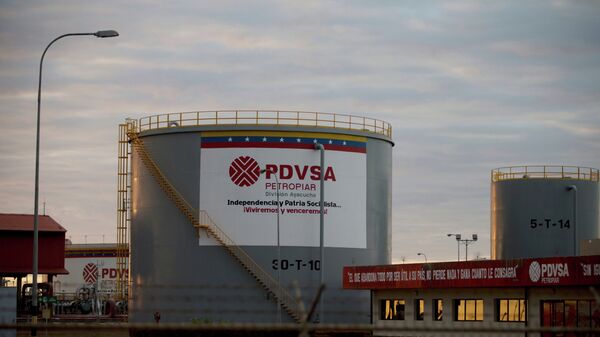 China has two major reasons for supporting the government of President Nicolas Maduro and resisting US and opposition efforts to institute regime change in Venezuela, Dr. Antonio C. Hsiang, director of the Center for Latin American Economy & Trade Studies at Taiwan's Chihlee University of Technology, explained.

Speaking to Sputnik, Dr. Hsiang recalled that from the economic perspective, "under the oil-for-loan deals, China lent Venezuela approximately US$60 billion between 2007 and 2017."

"However, Beijing's support is not without limits. Last year China balked at making new financial commitments because of an outstanding bilateral debt reportedly in excess of $19 billion," the academic added.

Caracas Slams US Demand That Maduro 'Get Out of Way' of Humanitarian Aid
However, their political ties are more significant according to Hsiang, who recalled that Venezuela is listed as one of China's "comprehensive strategic partners" in Latin America.

"During the meeting with Maduro last September, [Chinese President Xi Jinping] said 'Developing relations with Venezuela was a strategic decision for China…China and Venezuela have to enhance friendly mutual trust and push for mutually beneficial cooperation'. It is unwise to change [this] stand in less than five months," the academic noted.

Furthermore, "it is true that the current situation in Venezuela is a part of the geopolitical game by the US to contain China, at least to prevent China's further 'natural extension' to the US' backyard," Hsiang added.

Self-Proclaimed Leader Guaido Vows to Ask EU to Protect Venezuela's Assets
The academic recalled that ever since President Xi told Argentinean President Mauricio Macri that Beijing sees the Latin American and the Caribbean region as a "natural extension" of China's Maritime Silk Road project in November 2017, "the possibility of its inclusion in the Belt and Road Initiative has become more salient." Panama signed onto the global Chinese trade and infrastructure deal in 2017, with 14 other regional countries joining in the year that followed.

The Venezuelan crisis poses a threat to Beijing's plans. "Consequently, China should remain vigilant that several so-called 'comprehensive strategic partners' in Latin America are not on her side, such as Brazil, Argentina, Chile, Panama and Mexico," Dr. Hsiang concluded.

Trump Advisor Calls on Venezuelan Military, Central Bank to Join Opposition
China has invested heavily in Venezuela's oil industry. Late last month, after the introduction of unilateral US sanctions against Venezuela's PDSVA state-owned oil company, including plans to block some $7 billion of the company's assets, Beijing vowed to continue to develop cooperation with the Latin American country in a variety of areas. In December, the PDVSA subsidiary working with China's National Petroleum Corporation reported having doubled production over the previous seven months amid a freefall in overall Venezuelan oil output.

Last week, a US government source speaking to The Wall Street Journal said that the Trump administration has reportedly adopted a new strategy toward all of Latin America aimed against Cuba, Russia, China and Iran, with Venezuela at the forefront of a more aggressive doctrine looking to sow discord between Caracas and Havana and cause the "collapse of the regimes" in both countries.

The long-running political crisis in Venezuela entered a new phase last week, after National Assembly head Juan Guaido proclaimed himself the country's interim president. The US and its Latin American, Canadian and European allies supported the attempted coup, while Russia, China, Mexico, Cuba, Bolivia, Nicaragua, Iran and Turkey voiced their support for Nicolas Maduro, the country's democratically elected president, and urged outside powers not to meddle in Venezuela's affairs.