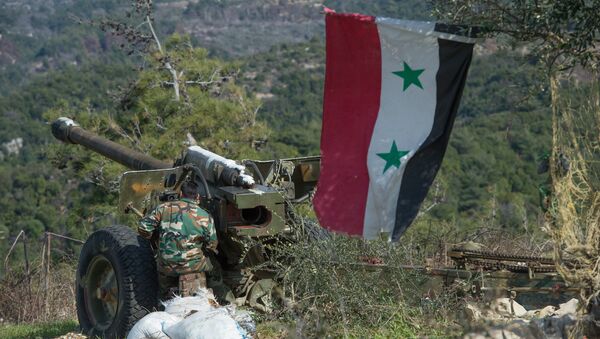 According to the report, international coalition airstrikes on Syrian Army artillery located near the eastern city of Abu Kamal injured at least two servicemen.

"At around 23:30 local time [Saturday, 21:30 Saturday GMT] the aviation of the international coalition conducted an airstrike on the artillery mount of our forces operating in As Sukkariya region to the west of Abu Kamal… As a result of the airstrike, the mount was destroyed and two servicemen were injured", the source said.

US-led forces have killed at least 1,190 civilians while battling the Daesh terrorist group in Syria and Iraq over the last three and a half years, Operation Inherent Resolve (OIR) said in its monthly casualty assessment on 31 January. In late December, the coalition reported 1,139 civilian deaths from 31,406 strikes during the entire campaign.

Claims Daesh Will Surge in Syria After US Leaves Just ‘Pentagon Scare-Mongering’
Combined Joint Task Force — Operation Inherent Resolve (CJTF-OIR) said in a press release on Wednesday that the coalition conducted 645 strikes in Syria and nine in Iraq during the two-week period from 13 January to 26 January.

The strikes were conducted as the United States was preparing to withdraw its ground forces from Syria on orders from President Donald Trump, who said the Daesh had been defeated in the country.

Turkey is Not Reliable Partner in Syria - Ex-US Envoy to Coalition
In 2014, the US-led coalition of more than 70 countries launched a military campaign against the Daesh terror group in Syria that has been not authorized by the Syrian government or the UN Security Council.

The Syrian government has repeatedly said that all foreign forces operating in Syria without the permission of the country’s government are there in violation of domestic and international law and must withdraw.

Daesh (also known as ISIS/ISIL/IS) is a terrorist group banned in Russia and many other countries.