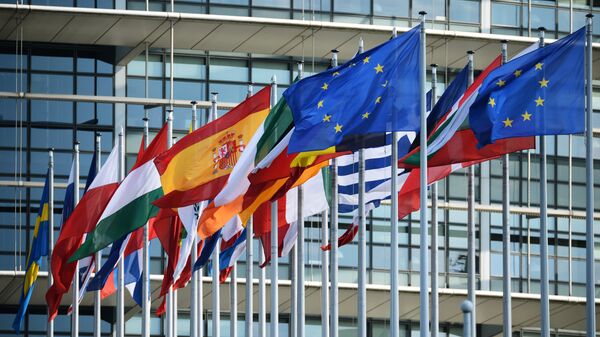 BRUSSELS (Sputnik) – The right to recognize or not to recognize the leadership of Venezuela lies with EU member states and not the institutions of the EU, the EU foreign policy chief, Federica Mogherini, said amid the adoption of the EU Parliament’s resolution recognizing Juan Guaido as the Venezuelan legitimate acting president.

"It is not a prerogative of the European Union to recognize or to not recognize states, not to mention internal institutions of the states. The authority to do so — it is not in the European Union, it is in the member states", Mogherini told reporters after the informal meeting of EU foreign ministers in Bucharest on Thursday, when asked about the bloc's position on the recognition of Guaido as Venezuela’s president in the light of the European Parliament’s resolution adoption.

At the talks, the top diplomats had discussed the next steps that the EU member states would take on the Venezuelan crisis issue, Mogherini continued, adding that the European Union would coordinate the common position on the crisis.

EU to Set Up Intl Contact Group on Venezuela Crisis - Mogherini
"The common declaration we had last Saturday that indicated already then that the European Union will take further actions, including on the issue of recognition of the country’s leadership … gives member states a framework of coherence, within which single member states will exercise their national prerogatives", Mogherini stated.

The resolution was passed on Thursday, recognizing the head of the Venezuelan National Assembly and the self-proclaimed interim president as the president and urging the EU member states to follow suit.

World
Russia Debunks Rumours of Plane Sent to Venezuela to Grab the Country’s Gold
Guaido declared himself as Venezuela’s interim president on 23 January and was immediately supported by the United States and a number of other countries.

Venezuelan President Nicolas Maduro, backed by China, Mexico and Russia among other countries accused Guaido of acting at the instructions of the United States and said that Washington was plotting together with his government’s opponents to overthrow him.