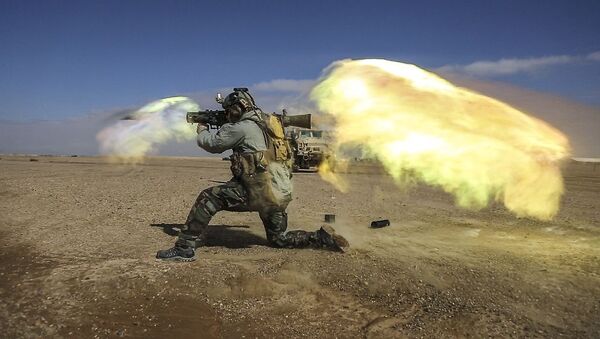 CC0 / /
Subscribe
International
India
Africa
Over the last two years, the Indian Army has started to strengthen the infantry’s night fighting capabilities by issuing a tender worth around $1 billion for the purchase of thermal imagers for rifles, machine guns, recoilless rifles/rocket launchers, handheld devices and others.

The Indian Defence Ministry is set to purchase 3,500 night sights for 84mm Carl Gustaf rocket launchers that can detect hostile tanks at a minimum distance of around 1000 metres.

The first interaction with interested vendors has been scheduled for 1 February, before a formal tender is floated in May 2019. The 84mm Carl Gustaf rocket launcher is the Indian Army's standard anti-tank weapon authorized to each infantry platoon. Its effective range varies from 500 to 800 metres.

"The Uncooled Thermal Imaging Sight so desired by the infantry should be a lightweight and ruggedized device to enable accurate engagement of vehicle and human target by use of 84mm rocket launcher at night/hours of darkness/poor visibility", the request for information issued by the Indian Army reads.

Indian Firm Signs $110 Mln Contract for Production of Russian ATGM for Army
The Carl Gustaf rocket launcher has been a crucial part of the Indian Army's inventory since 1974 and it has been used to destroy enemy posts along the western border. The launcher was also used by India's special forces during the much-touted surgical strike on terrorist camps inside Pakistan in 2016. India's Ordnance Factories are currently producing the latest version of the rocket launcher.

The Indian Army also wants the night sights to be capable of facilitating the firing of other in-service ammunition, such as 84mm high-explosive anti-tank (HEAT) 551 rockets, high-explosive armor penetrating rockets, as well as smoke and illumination shells.

In the past, India has imported thermal imaging (TI) sights for T-72 tanks from Poland. These are also available in some other countries like France, Israel, Russia, Ukraine, USA etc.