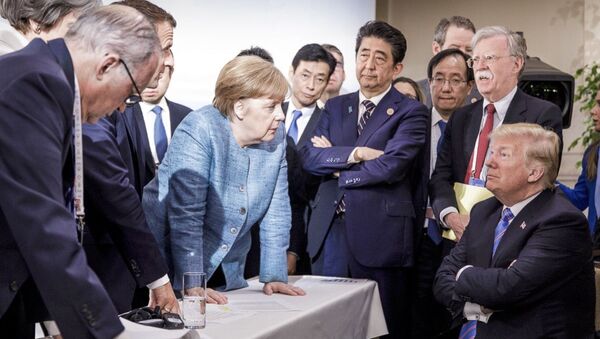 The pledge comes after Maja Kocijancic, a spokeswoman for EU foreign policy chief Federica Mogherini said late last week that Brussels is finalising efforts to set up an alternative money payment channel to facilitate business transactions with Tehran amid the US's anti-Iranian sanctions.

The White House will slap stiff fines and penalties on the EU if it tries to circumvent Washington's sanctions against Iran, an unnamed senior US administration official was quoted by the AP as saying.

According to the official, the US will fully enforce its anti-Iranian sanctions and "hold anyone accountable for undermining them".

READ MORE: Europe Prepares to Help Trade With Iran Despite US Sanctions — Reports

The remarks followed a statement by Maja Kocijancic, a spokeswoman for EU foreign policy chief Federica Mogherini, that preparations for the alternative money system between Tehran and Brussels were "at an advanced stage" and that the launch will be announced "very soon".

The system is part of the EU's efforts to create the so-called Special Purpose Vehicle (SPV), which was proposed in September 2018 in a bid to give EU companies a way to trade with Tehran without being threatened by US sanctions.

The tool is expected to become an alternative to the international messaging system SWIFT, which had already cut off several Iranian banks from its services.

The move was preceded by Washington's warning that SWIFT, like any other entity, should abide by US restrictions targeting Iran, or risk getting slapped with secondary sanctions.

Mogherini Says Work Continues on EU System Bypassing US Sanctions Against Iran
Following US President Donald Trump's announcement in May 2018 that Washington would be withdrawing from the 2015 Iran nuclear deal and re-imposing sanctions against Tehran, several European leaders, including French President Macron and German Chancellor Merkel, tried to dissuade the US from making the unilateral move, but to no avail.

Brussels then pledged to honour the provisions of the Joint Comprehensive Plan of Action and find a way for its companies to continue trading with Tehran despite US sanctions.