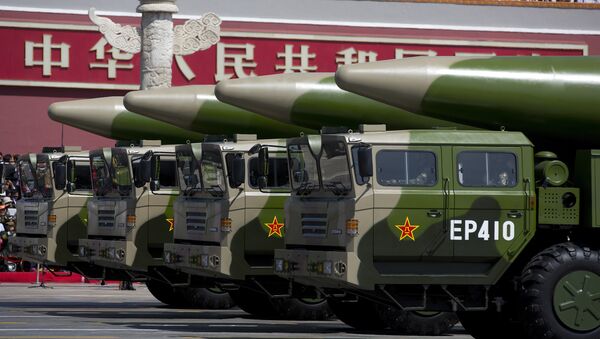 © AFP 2022 / ANDY WONG
Subscribe
Earlier, the Chinese military mobilised its DF-26 nuclear-capable intermediate-range anti-ship missiles, also known as 'Guam Killers' for their ability to strike American military installations on the Pacific island, amid ongoing US 'freedom of navigation' missions in the South China Sea and through the Taiwan Strait.

The video, filmed during a live-fire exercise somewhere in Northwest China, showed one of two DF-26 missiles which were launched last week.

Speaking to China's Global Times newspaper, military observer and former Rocket Force veteran Song Zhongping said that the DF-26 is capable of altering its flight trajectory, and has guidance systems enabling it to hit a slow-moving aircraft carrier. The rocket's double-cone structure also provides it with stealth capabilities, making it more difficult to intercept, he said.

"An information network connected to the warhead, which possibly includes satellites, ground and naval radar in addition to radar on the missile itself, will constantly update the location of a moving target, informing flight control where to guide the missile," a second, anonymous military expert told the newspaper.

US Navy Vessels Sail Through Taiwan Strait Despite Beijing's Past Warnings
The PLA's Rocket Force commissioned its first batch of 22 DF-26 mobile missile systems last April. Earlier this month, Chinese media reported that the military had mobilised the missiles in its remote northwest plateau, presumably in response to a US guided missile destroyer's 'freedom of navigation' passage through the Paracel/Xisha Islands, which Beijing said amounted to trespassing in its territorial waters.

China-US tensions escalated again last week, after the US Navy sailed two vessels through the Taiwan Strait. Beijing has repeatedly called on Washington to stay clear of the strait over concerns that the US was providing military support to Taiwan. Although the island has been a self-governing entity since the end of the Chinese Civil War in 1949, Beijing considers it an integral part of China.