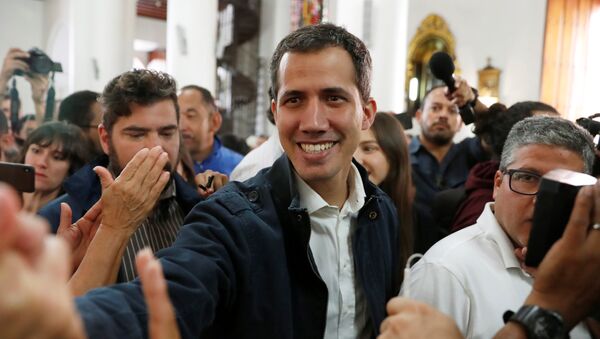 Guaidó, who claimed President Maduro had “usurped” power with last year’s election, argued that this gave him the authority to claim temporary leadership as the presidency was left “vacant”, he explained in a recent interview with the Guardian.

“Frustration has turned to hope. People are daring to dream again … we have awoken from a nightmare to have new dreams, to dream of the future, to dream of our country, [to dream] not of what we were, but of what we can become,” said the 35-year-old politician.

Guaidó was supported by the US, with US Secretary of State Mike Pompeo urging members to support the self-declared president of Venezuela at a specially convened meeting of the UN security council on Saturday. Yet Britain, France, Germany and Spain say they will recognise Guaidó as interim president unless fresh elections are called within eight days.

Guaidó also realises that his opposition movement still lacks support from the Venezuelan military. Last week Venezuela’s defence minister slammed Guaidó’s “criminal plan” to destabilise Venezuela and said he would support Maduro. Guaidó noted that the discharge of 3,600 military officials since last year was proof of the “emerging” support for protesters within the armed forces.

“We have yet to consolidate these [gains] in order for us to really to be able to execute the process that will lead us to a transitional government and, ultimately, to fresh elections,” the opposition leader said.

Israel Recognises Guaido as Venezuela's President - Netanyahu
Earlier Venezuelan former trade minister, Moisés Naím raised concerns that Venezuela could become a fractured country due to the confrontation between Guaidó and Maduro. He told the Guardian he was worried that the country could fragment under the control of different chieftains and warlords and generals and narco-traffickers and envisioned the possibility of  “Venezuela becoming like a tapestry of different power centres.”

Guaidó tried to answer these fears by insisting that “the idea is to increase pressure,” not spark a conflict. The self-declared interim president said that there are risks “but there will be bigger rewards.”

“We all know that the situation is dire but regardless of this, I have received encouragement. It’s been great to see a newfound hope,” he added.

He also noted that new the elections should be called as soon as possible after Maduro is gone. The latest move of the head of Venezuela's opposition-led National Assembly is scheduled for Sunday as he is set to announce a fresh anti-government rally on Sunday.

"I urge everyone to be attentive as today at 8:00 p.m. local time [00:00 GMT] we will announce the next manifestation which should be convincing," Guaidó wrote on Twitter.

000000
Popular comments
So funky guy doesn't just execute orders from Washington. Very believable if you are not from this planet.

FBulovic
28 January 2019, 01:41 GMT4
000000
all illegal guaido was not elected by Democratic votes free elections, maduro was elected last year with free elections the whole world saw it, and he wants Venezuela to have independence and freedom away from fascist imperialism, dependent on USA/UK their corporation industries, and enterprises, to suppress them ceding to oppression exploiting, majority robing the raw resources, and keeping them ignorant, no rights for the majority only minority and them USA/UK criminals like them, while maduro wants to educate them all, and create national corporations, industries, and enterprises, to employ their people having them own private retail stores selling national and imports, the door for freedom and independence away from USA/UK fascist imperialism sanctions that denies them the right to develop, buy and sell to eat, progress, and defend themselves.