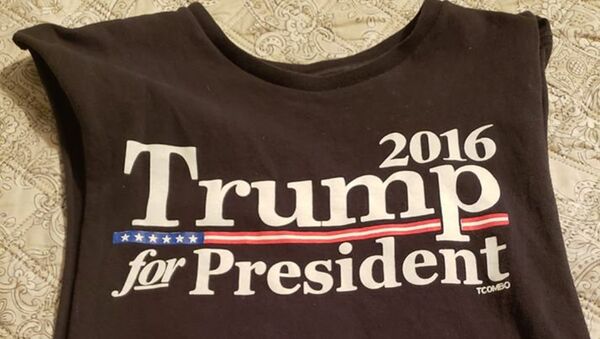 © Photo : Facebook / Jake Talbot
Subscribe
At a time when the US is deeply divided along political lines, keeping your political beliefs private is advised, even in public indoor spaces, especially if your outfit endorses the current US president.

A US army veteran has abandoned his membership at his favourite gym after its owner told him not to wear a pro-Trump garment at her establishment.

The controversy emerged when Jack Talbot appeared at the CDY Fitness gym in Troy, Missouri wearing a T-shirt that read "2016 Trump for President". He said that the gym owner, Liz Burke, approached him and asked him to remove the shirt because other members were offended by it and deemed it "racist".

"I freaking hate that word whenever people use it. It's thrown around way too loosely," he said in a viral Facebook post. "It's 2019, get the hell over it. It's not racism."

"It's a free country. It's what I fight for. I love this country, and I'm very patriotic," Talbot told TV station KSDK. "That's my commander in chief," he said of Donald Trump. "He's doing a job and everyone needs to support him. I think he's doing a good job. I'm tired of the split, divide of the whole country."

Liz Burke explained that she was "simply attempting to ensure that "all of her members felt safe and unthreatened" — but that does not regard Talbot anymore, as he has vowed not to return to CDY Fitness and is said to have already go free membership at another gym.

The gym owner also disputed Talbot's account, claiming that she did not tell him to remove or change his T-shirt, but told him not to wear it again. "I said, 'Jake, we're friends and I love you, but I'd appreciate it if you didn't wear that shirt in the future,'" she said.

The controversy spilled all over social media, with many supporting Talbot and his right to free speech.

"That offends me, close the gym down," joked a user under the nickname Antone Boschert.

"CDY Fitness, way to sink your own ship," said another angry commenter.

Others, however, were quick to condemn the man for supporting a "racist" president.

"What a crybaby b*tch," wrote a user under the handle Tiffany Fox.

Another added: "You support a racist, that makes you a racist. It always amazes me how racists like you, Jake Talbot, hate being called racist. You’re an embarrassment to good men and what the military stands for."

Media turned the spotlight on political-themed garments last week when a teenage student donning a MAGA hat was filmed facing off a Native American elder. Guardians of social justice rushed to accuse the boy of mocking and harassing the man, but the real story turned out to be somewhat far from what the mainstream media reported.

000000
Popular comments
Would it be OK to wear trump shirt if your say of Mexican American heritage?