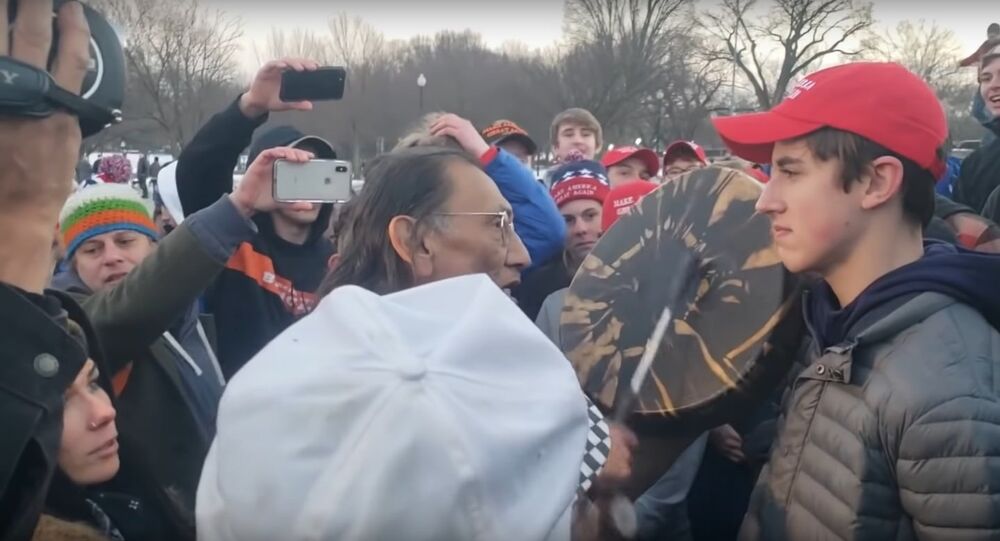 A viral video of a standoff between an underage student wearing a MAGA hat and a Native American elder rocked US media and the internet, with many accusing the "MAGA kid" of racism. However, as videos from alternative viewpoints started to appear, it has become clear that the story is more complex than it initially portrayed.

The scandal started to unfold around students from Covington Catholic High School after a video of them chanting around a Native American elder, playing on his drum, emerged on social media. Many netizens believed that students, some of whom were wearing "Make America Great Again" (MAGA) hats, were mocking and harassing the elder, later identified as Vietnam veteran Nathan Phillips.

How People and Media Reacted

The Covington Catholic High School issued a statement, promising to identify and, if necessary, to punish those who acted improperly, speculating about possible expulsions. That didn't stop the public outrage, with some social media users demanding the school to publish the names of those allegedly responsible for the confrontation.

Ps. The reply from the school was pathetic and impotent. Name these kids. I want NAMES. Shame them. If you think these fuckers wouldn’t dox you in a heartbeat, think again. https://t.co/IS80wiaQ7v

Some in the US media also focused on the students' "surrounding" the Native American elder and how the latter claimed hearing "build that wall" chants.

It turned out later that the students, who had arrived in DC to participate in a March for Life, had been waiting for their bus, when they were verbally attacked by a group of Black Hebrew Israelites. The latter were harassing the students, calling them "white crackers", "incest children", and "faggots". The Covington students in turn decided to drown out the Israelites with the school's chants — "Cov Cath is the best".

At that moment, Phillips considered that things were getting "ugly" and decided to intervene. He led an Indigenous People's March, in which he participated, to divide the students and the Black Israelites, while singing a tribal song and beating his drum. At some point he turned to go through the students' mob, with most of them gradually making way for the leader of the unexpected performance.

The longer videos from the scene that surfaced on social media later showed this development in a clearer way than the video, which initially sparked the outrage.

But one of the students, Nick Sandmann, didn't step aside looking directly at Phillips with a neutral face and smiling occasionally, while the elder continued to beat his drum and sing standing right next to Sandmann. The standoff continued for some time, with many students jumping in rhythm to Phillips' song.

Just in: Statement of Nick Sandmann, Covington Catholic High School junior, about the event at the Lincoln Memorial: pic.twitter.com/PkuMh2cVZM

The student at the epicentre of this scandal said that ever since the original video, showing the standoff, surfaced on social media, he and his parents have been receiving death threats. The subsequent appearance of footage, showing the incident from other angles, hasn't fixed the situation. In his statement Sandmann urged people to avoid making snap judgments and watch fuller videos to understand the whole situation.

Social Media Reactions to New Footage of the Incident

Many of those who believed that there was more to the story behind the confrontation between the Covington Catholic High School students and the Native American veteran have slammed the media and netizens who aggressively attacked the "MAGA hat kids" in their publications, urging them to issue full retractions.

To save your credibility Jim, you should delete this Tweet of yours. The overwhelming weight of the evidence favors these young men. For the sake of truth and fairness, either delete or issue a full retraction and apology. Hating Trump is no reason to destroy these boys with lies

Wow at least TRY to catch up and be relevant. And aim for some iota of truth and fact.

At the same time, some of those who initially criticised the actions of the students admitted that they had been mistaken after seeing the situation in its entirety and asked for forgiveness.

Sad how this has become Bonfire of Vanities. Full video paints far different picture. Disappointed by illiberal reactions from many liberal friends. There's a lot of projection occurring due to #MAGA hat young man is wearing. Also upset w/ myself for initial knee-jerk reaction.

Just watched the full, unedited video of the MAGA kid and the Native American vet.

The kid did absolutely nothing wrong. I regret the error. It makes this assault by leftists I witnessed all the more sick. https://t.co/JZOyMCnUtu

One twitterian noted that judging by the latest videos, the students acted more appropriately than other "older" participants of the incident.

The MAGA hat kid is showing more maturity and self control than all of the adults who have been harassing and saying mean things about him.

On the other hand, some netizens found the new videos and Sandmann's statement unconvincing, claiming that the "MAGA hat kids" had just hired a PR team and lawyers to protect themselves from the criticsism.

These maga hat kids literally have a team of lawyers and a PR Firm. They’ve got money, the Church, and the republican establishment behind them — a trusted machine skilled at shielding privileged white boys from responsibility. Use your eyes instead and judge them accordingly.

Land of the Free: MAGA Hat Gets US Journalist Fired on the Spot