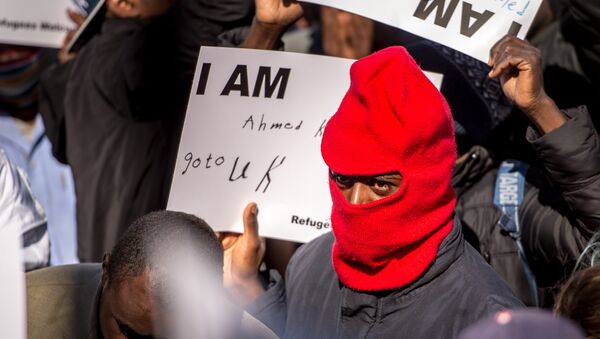 © AFP 2023 / PHILIPPE HUGUEN
Subscribe
International
India
Africa
Although London has given notice about its intention to leave the bloc, the UK is still obliged to observe the Dublin III Regulation regarding migrants in Europe. The system entitles member states to deport migrants to the first country of their arrival in the EU.

The European Union Court of Justice has reaffirmed the UK’s responsibility to take back migrants if Britain was the first country through which they entered the bloc and process their asylum applications, despite London being on its way to leave the union. Thus, the court ruled that despite its intentions to exit the EU, the Dublin III Regulation on migrants is still binding.

#ECJ, #Brexit: A Member State that has given notice of its intention to withdraw from the #EU remains the responsible State for the purposes of asylum applications on the basis of the #DublinIII Regulation https://t.co/BXuldkaxWx

​The top EU court has upheld a 2017 ruling on Ireland’s International Protection Appeals Tribunal (IPAT), which agreed with the Irish Refugee Applications Commissioner’s decision deport a family of three back to the UK. Their visas in the UK had expired, so they attempted to apply for asylum in Ireland.

However, an action was brought against the IPAT decision at Ireland’s High Court, which turned to the EUCJ to clarify how the withdrawal process impacts the Dublin Regulation. Now the EU court has concluded that a country is to fully comply with the EU’s basic regulations on asylum and migration until the time of its actual withdrawal, even if it has notified about its intention to exit and triggered the corresponding Article 50, as Britain did for Brexit.

“The Court concludes that it is a matter for the Member States to determine which national authorities have power to apply the Dublin III Regulation. It adds that a Member State is free to entrust to different authorities the task of applying the criteria defined by that regulation relating to the determination of the Member State responsible and the task of applying the discretionary clause set out in that regulation”, the EUCJ statement reads.

Due to the results of the 2016 referendum, the UK is set to leave the European Union on 29 March, with the transition period expected to end in December 2020.  After two years of negotiating the divorce deal between the EU and Theresa May’s government, the Brexit agreement was rejected 432 to 202 by the UK Parliament.

READ MORE: Commentator on Brexit: 'We Should Have Been Preparing for No Deal from Day One'

Following the defeat, the prime minister, in her recent address to the Parliament, said that the only two ways to avoid a no-deal Brexit are striking an agreement with the EU or revoking Article 50, which would mean Britain remains part of the union.

Extending Article 50 would not guarantee averting a no-deal exit, according to her. The PM also added that the option of a second referendum wouldn’t be supported by a majority of lawmakers in the House of Commons.