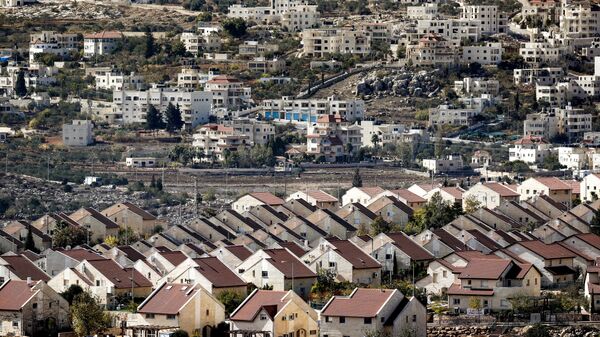 Israel’s Reshet 13 has reported that the Trump administration is planning to roll out a plan for the peaceful settlement of the Israeli-Palestinian conflict in the coming months.

According to the media outlet, the Palestinians will receive twice the territory it currently controls, while the historic centre of Jerusalem and the western part of the city will remain under Israeli jurisdiction.

It also allows Israelis to take over major settlement areas in the West Bank without enlarging them. The so-called illegal settlement outposts will have to be evacuated. Any financial losses should be compensated using the mechanism of territorial exchanges.

Sputnik has discussed the issue with Dr Yitzhak Brudny, Department of Political Science at the Hebrew University of Jerusalem.

Sputnik: How would you assess Washington's plan for the peaceful settlement of the crisis between Israel and Palestinians?

Yitzhak Brudny: First, it's not as you've mentioned. It's not going to unroll before the Israeli elections; that's the deal between President Trump and Prime Minister Netanyahu. The elections are on April 9, and that's a very long time, and we'll see what will happen in between.

Israel Unveils Highway in West Bank Slammed by Palestinians as 'Apartheid Road'
In the Middle East; three months is a whole lot of time and a lot of things can change between now and April 9, and after that. As for the plan itself, it's much less than the Palestinians were offered before.

If you look at the negotiations starting with the Camp David Accords and subsequent negotiations in 1999-2001, and then during the government of Ehud Olmert, when Minister of Foreign Affairs Livni was negotiating, the Palestinians were offered much more.

So, as for the Palestinian point of view, they were offered almost 95 percent of the West Bank at the start, and now this plan doesn't offer anything to the Palestinians regarding Jerusalem or refugees, the two issues which basically torpedoed the previous negotiations.

In that sense, it's not clear if it's a starter for the Palestinians, but the Netanyahu government is a right-wing government and the only way he can have his next government is not negotiating because negotiation means the end of his government.

Sputnik: What is your outlook for the parliamentary elections in Israel? Should any dramatic changes to the composition of the parliament be expected?

UNGA Adopts Resolution Calling for End to Israel’s Occupation of Palestine
If the indictment is before the elections all bets are off. We still don't know. All the recent public opinion polls suggest that he is getting around 30 members of parliament. That's basically what he has now. But his coalition partners, some of them are underwater; some of them are doing better.

So, Israel is a parliamentary system so where there may not be the victory of one party. He may have 30 members of parliament but does not have a partner. It depends on other players entering the elections and they have until February to declare if they are running or not, and we'll see what's going on. At this moment, the polls don't suggest the decisive victory of Netanyahu's coalition.

Sputnik: Mr Netanyahu has been criticised for his tough stance on the Israeli peace process; there was even an article in one of the most influential newspapers Haaretz, which said that the prime minister's to dealing with problems by using force may lead Israel to national suicide. What is your take on that?

Yitzhak Brudny: I think that Haaretz basically is right because Netanyahu only cares about being a prime minister, and he is a long-standing prime minister. That's the only thing he cares about; he doesn't have a long view of the process.

The way his own ruling party is constituted, and his coalition partner as well, they don't want any negotiations and he stalls for time and he thinks the time works for him. I don't think that is right and I think Haaretz is right in that sense the more we're stalling for time is worse for Israel.

Sputnik: How do you assess the US role as a mediator in peace talks between Palestinians and Israel?

Yitzhak Brudny: In the past, the Americans made an effort. One can say they never succeeded with the exception of Camp David in 1978 to mediate. At least there was a serious effort to bring both sides together.

It's not clear if Trump is committed to anything; he always says "I support the best deal". The America First agenda is basically showing the fact that the Americans don't care what's going on in the world.

Pro-Settlement Group Gives Airbnb Tour of Israel After West Bank Boycott
So, I have a hard time to see how he is offering something beyond something symbolic while all that he cares about is re-election and for his re-election, he needs the Evangelical vote; and the Evangelical vote is closely allied with the Israeli right and Prime Minister Netanyahu. So he cannot offer anything serious without endangering his chances for re-election which aren't as good as he would like them [to be].

Sputnik: What about the two-state solution? Experts say that is the only way out of this conflict; is it dead?

Views and opinions, expressed in the article are those of Yitzhak Brudny and do not necessarily reflect those of Sputnik.