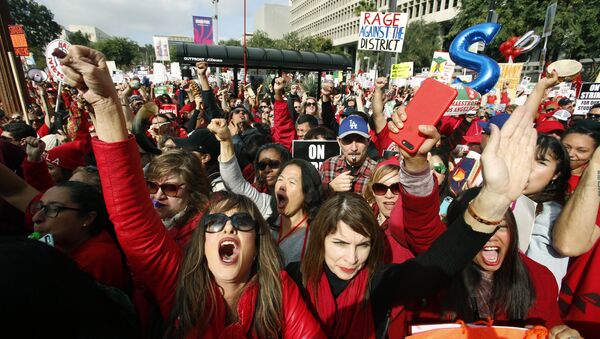 On Friday, Los Angeles mayor Eric Garcetti tweeted that negotiations between the United Teachers Los Angeles (UTLA) and Los Angeles Unified School District (LAUSD) had wrapped up Friday with no deal in sight. The mayor noted, however, that the two sides "had a second productive day of contract negotiations," which will continue Saturday morning.

"Do you feel your power?" union president Alex Caputo-Pearl asked protesters congregating from City Hall through Grand Park to the Music Center as the sun came out for the first time in a week. Celebrity performers including musicians Aloe Blacc and actor Sean Astin joined the teachers in support of their demands, the Los Angeles Times reported.

District officials sought to dampen the mood by placing guilt on the teachers for what they described as irresponsible political maneuvering.

"We need our educators and our students back in school come Tuesday morning. The onus is on us […] as leaders, to do what we have to do," LA schools superintendent Austin Beutner said at a Friday news conference.

"Too many students are missing out on the education they should be getting," he declared, adding, "We need to solve this now."

"There've been a lot of sleepless nights and hard days during this strike," Beutner suggested. "It has not been easy on anyone. That said, I remain optimistic about our ability to work together to find creative solutions to solve these long-term problems."

A mere 17 percent of students were estimated to have shown up at school Thursday. Facilities have been kept open by administrators, substitutes and employees who are not UTLA union members.

A day prior, Juan Flecha, the head of the administrators union, told Beutner that current conditions at schools were "dire and unsafe," but the district official did not respond to the accusation, merely stating: "students and families are counting on our schools to stay open."

US Teachers in Seattle Poised to Strike as Negotiations Falter

The strike, involving over 30,000 teachers in one of the largest school districts in the US, began last week.

The teacher's union has been urging the district to hire more counselors, nurses, librarians and other professional staff as well as to reduce overstretched class sizes. he LAUSD claims that the staffing demands would cost approximately $786 million a year as it claims that it is running a $500-million annual deficit.

Last week, the district's latest offer included adding 1,200 teachers, counselors, nurses and librarians to LA schools, decreasing class sizes by just two students, enforcing a 32-39 student cap on all classes and offering a 6-percent salary increase for teachers spread over two years. Teachers are asking for a 6.5 percent increase backdated one year to be effective immediately.

According to LAUSD, the distract has lost $125.1 million through Friday due to the strike.