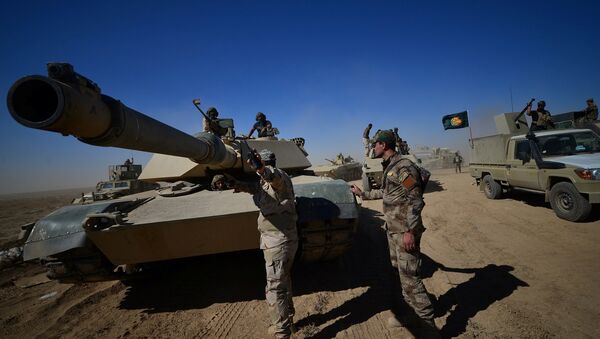 © REUTERS / Stringer
Subscribe
This is the third time the militia organization has prevented US military mission in the republic, according to military experts.

Iraq's Popular Mobilization Forces (PMF) have claimed they stopped the US military from conducting a "suspicious" reconnaissance mission on the border with Syria, according to a report by Asharq Al-Awsat.

The US troops reportedly acted in the area under PMF control, the report says.

"The American provocations have reached such an extent as to reveal our secret intelligence on the border," an Anbar region PMF field operations commander Qassem Mosleh said in a statement. "The Anbar [region] command stopped the troops from continuing their reconnaissance, forcing them to turn back to their base."

"Such reconnaissance is considered a violation of Iraqi national sovereignty," he stated.

US-Led Coalition Reports on New Strikes in Syria, Iraq
According to Mosleh, the US troops were "extracting critical information" from security forces deployed along the border. The militia commander said the servicemen were inquiring about the number of Iraqi forces at various border points, as well as the types of weapons and ammunition they possessed.

The US military has not yet commented on the PMF's claims, the website reports.

Tareq al-Aasal, the PMF deputy chief in Anbar, did not confirm Mosleh's statement, saying that since he is now in al-Ramadi, he does not possess enough information.

Armed groups expert Hashem al-Hashemi, however, told Asharq Al-Awsat that this third time that the "PMF barred American forces from continuing a reconnaissance mission," with the first incident taking place in 2016, and the second one taking place just two weeks ago.

Lt. Gen. Ben Hodges on Iraq: 'I Never Dreamed That We Would Still Be Involved'
He said the PMF treats American troops the same way the Americans treat it, whereby neither side is allowed to approach the other's areas of deployment, the newspaper reports.

According to al-Hashemi, all US military activity in the country is usually conducted with supervision of Iraqi forces.

"It is rare for them to move around without official Iraqi forces," Hashemi explained.

The PMF is an official umbrella entity composed of up to 40 various militant groups united under the aegis of Iraq's Interior Ministry. The force was created in an effort to unite militants' efforts to drive Daesh out of country.

The PMF opposes the deployment of US troops in Iraq, and its representatives in Iraqi parliament regularly call for the government to demand a US withdrawal.

Since the withdrawal of most of the 100,000-strong US contingent from Iraq in 2010, some 5,000 US troops still remain in the republic. US President Donald Trump has so far announced no intention to bring the remaining servicemen back home.