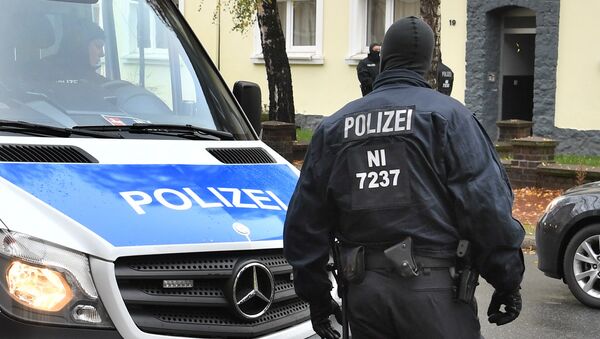 MOSCOW (Sputnik) - The Syrian national, 26, was detained in the German city of Mainz in late December, according to media reports. The man was suspected of plotting a terrorist attack and was thought to be linked to four individuals, who were detained in the Dutch city of Rotterdam on the same day.

German authorities on Tuesday extradited the suspect to the Netherlands, the public prosecutor general's office said in a statement.

"Employees of the Rhineland-Palatinate criminal police transferred the wanted [Syrian national] to the Dutch authorities at the border checkpoint of Goch at noon," the statement said, as quoted by the Wiesbadener Kurier newspaper.

On 9 January, the Higher Regional Court in Koblenz ruled to extradite the Syrian to the Netherlands.

In 2015, Germany declared an open-door refugee policy, becoming one of the key destinations for migrants coming to Europe from the Middle East and North Africa.

Van Ramming Attack in Germany's Muenster Kills 3, Injures 20 (PHOTOS, VIDEOS)
The majority of asylum seekers arriving in Germany are from Syria and Afghanistan. The undocumented migrant influx has raised security concerns in the country and several political movements, such as the Eurosceptic German party "Alternative for Germany" (AfD) has repeatedly called for an increase of migration control in order to prevent potential terrorist attacks.

Meanwhile, Germany has been on a high alert amid a series of terrorist attacks across Europe. In December 2016, Anis Amri, a Tunisian affiliated with the Daesh terrorist group, stole a truck and drove it into crowd at a Christmas market in the German capital of Berlin, killing 12 people and injuring 48 others.