'Based on How Things Look, Greek Gov’t Will Survive Confidence Vote' – Scholar 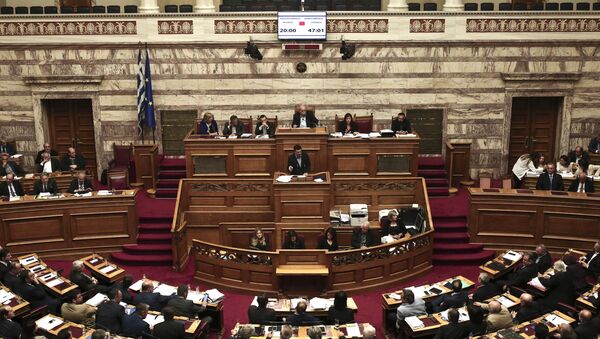 Greek Defence Minister Panos Kammenos submitted his resignation to Prime Minister Alexis Tsipras on Sunday in protest against the Macedonia name deal. Following the development, the prime minister announced that he would call a confidence vote for his government.

Radio Sputnik discussed the risk of an early election in Greece with Kostas Ifantis, associate professor of international relations at Kadir Has University and at Panteion University in Athens.

Sputnik: What outcome of a no-confidence vote could we expect? How high is the risk of an early election?

Prof Kostas Ifantis: I think that, based on how things look, the government will survive the confidence vote. Given the circumstances, I would say that although it would look marginal, as far as the number of votes is concerned, politically it is rather a comfortable majority and I know it sounds absurd — 151, but I think everything is locked up, that is why the government is calling the confidence vote.

At least 4 MPs or former MPs of the Independent Greeks had declared their intention to support the government and we are expecting another two from other minor parties or independent MPs in the government, in the parliament, and I think as I have said that the government will survive politically comfortably.

Sputnik: How do ordinary Greeks feel about this name dispute? Is this a big thing for them?

Prof Kostas Ifantis: Although someone would expect that after a quarter of a century this thing would have subsided somehow, it has not. I don't want to go into the historical reasons for such, some people call it an obsession — I would use the word in inverted commas. Nevertheless, it reflects historical and local, geographically speaking, sensitivities.

WATCH Greek Protesters Clash With Police in Athens Amid Merkel's Visit
So there is a strong sentiment and a very, very strong majority or majoritarian view about the name-issue with what we call today Northern Macedonia. That is why it has proven so hard to find a solution over the years. Now the agreements that Athens and Skopje have reached, I think, will go through the Greek parliament and Northern Macedonia will join NATO sometime in the summer and I am certain of this because it is a fait accompli, according to my view, and there is no one in Greece that can undo this. Will the problems wither away? I don't think so.

No, identity politics are extremely persistent. Maybe the settlement leaves one of the parties less satisfied than the other, and this is Athens. The affair will re-emerge in the context of Skopje's European Union-drive, I think.

Sputnik: If a snap election is to take place, how could it change the political composition of the parliament?

Greek, Bulgarian Prime Ministers Urge EU to Clearly Define Migration Policy
Prof Kostas Ifantis: Well, if we believe the polls then, and they have been persistent in their outcome in their prediction for the last at least two years, then the opposition party, New Democracy, the centre-right opposition party, will win. Most importantly the qualitative findings in the polls are impressive: the expectation of the electoral body, the comparison between the two leaders — Prime Minister Tsipras and opposition leader [Kyriakos] Mitsotakis — the latter enjoys an impressive lead in the polls for the last two years, which is highly unusual in Greek politics.

So, the only question I think is, again according to the polls, whether New Democracy will win an overall majority on its own. This will, I think, depend not so much on Syriza's performance, but on how many of the small, in terms of political appeal, political parties will cross the constitutional 3 percent threshold. If we have, as polls predict a five-party parliament, then New Democracy can expect to win an overall majority of more than 151 MPs.