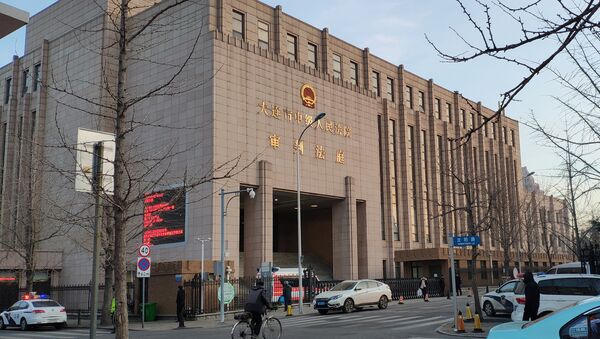 © REUTERS / Stringer
Subscribe
Earlier, in November 2016, a Chinese court had considered giving the man a 15-year sentence for his crimes, but later determined such a sentence to be too mild for an offence deemed that serious in the country.

Robert Lloyd Schellenberg, a Canadian citizen, arrested in China in 2014, has been sentenced to death by the Dalian Intermediate People's Court over drug smuggling accusations, according to a statement by the court. The defendant will reportedly have 10 days to challenge the court's ruling.

The man was sentenced to 15 years in prison in 2016, but filed an appeal. While reviewing the appeal, Liaoning province's high court argued that the Canadian had been part of an international drug smuggling operation and ruled that the initial punishment was too lenient, considering the crimes that he had committed.

Prime Minister Justin Trudeau said that the case of the Canadian citizen sentenced to death is of extreme concern to Ottawa. He further promised to "engage [China] strongly" over cases of Canadians that have been arrested in the Asian state.

"It is of extreme concern to us as a government, as it should be to all our international friends and allies, that China has chosen to arbitrarily apply death penalties in cases, as in this case facing a Canadian," Trudeau said.

The ruling comes amid tensions between Beijing and Ottawa, which began after the latter arrested top Huawei executive Meng Wanzhou at the request of the US. Washington suspects the top Huawei manager of facilitating the subversion of American sanctions against Iran, which were imposed in November 2018.

Beijing considers drug-related offences and drug trafficking to be serious crimes and punishable by death in China. This is not the first time that a foreigner is sentenced to death over drug charges in China. A British citizen, Akmal Shaikh, was arrested, sentenced, and executed in the Asian country in 2009 for allegedly trafficking approximately 4kg of heroin.