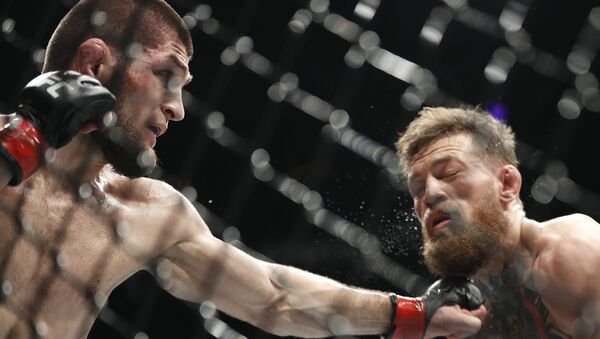 The Russian mixed martial arts (MMA) fighter handily thrashed his cocky Irish rival in October at UFC 229, with the brawl which broke out afterwards between Khabib and Conor's teams costing Nurmagomedov his payday and leading to the temporary suspension of both fighters.

Conor McGregor has taken to social media to take a fresh swing at Khabib Nurmagomedov, along with former training partner Paulie Malignaggi, calling them "broke b*tches" and claiming that he told the Russian fighter to stop "b*tching" during the third round of their Vegas fight.

"I told [Malignaggi] here to his face. "Don't be bitching." Common knowledge I would think for a fighting man. Don't be a b*tch, b*tching. The same thing I said to khabib [sic] at the end of round 3. My round. Don't be b*tching! Every single round b*tching to the referee. He was even b*tching in the fourth round from mount position. It baffled me," McGregor wrote in an Instagram post.

Let the record show. I like Paulie Malinaggi. Here is a confrontation between us regarding a picture he was upset about. Yes you heard that right. A picture. I told him here to his face. “Don’t be bitching.” Common knowledge I would think for a fighting man. Don’t be a bitch, bitching. The same thing I said to khabib at the end of round 3. My round. Don’t be bitching! Every single round bitching to the referee. He was even bitching in the fourth round from mount position. It baffled me. If anyone should have been saying anything to the referee, it should have been me in that 1st round. That round he held onto my legs for four minutes straight. With zero activity. But a fight is a fight who gives a fuck. Crying to the referee like a proper bitch. I was trying to dig my fingers into his Adams Apple. Many individuals in the fight business, I have learned lately, are absolute bitches. I know you’s are broke boys. But don’t be broke bitches.

The fighter suggested that if anyone should have been complaining to the ref, it was him. According to Conor, during the first round of their fight, Khabib "held onto my legs for four minutes straight. With zero activity. But a fight is a fight who gives a f*ck."

Nurmagomedov appeared to preempt McGregor's remarks with his own Instagram post on Friday, releasing a photo of him and his team, along with the lines "If one of us go to the war, We all go to the war…but it's different story. Deeds will always be above words. #Brothers."

If one of us go to the war, We all go to the war…but it’s different story. Deeds will always be above words. Поступки — всегда превыше слов. #Brothers

Nurmagomedov defeated McGregor at the T-Mobile Arena in Las Vegas on 6 October 2018 at UFC 229, thrashing him into submission with a neck crank late in round 4 and securing his 27th straight victory.

Conor, who hasn't won a fight since 2016, is 2-3 in his last five, including his disastrous boxing match against Floyd Mayweather, has continued to trash-talk his opponents.

UFC Santa: Khabib Vows to Fulfil Dreams of Young Fans After Getting Letters
Earlier this month, UFC president Dana White said he expects to see a rematch between Nurmagomedov and McGregor sometime this year. For now, both fighters remain suspended over the post-fight melee which broke out at their October fight. The fighters are expected to appear before the Nevada State Athletic Commission on January 29, but have been reported to be negotiating toward a settlement to avoid a public hearing.

Khabib jumped out of the octagon seconds after defeating McGregor, targeting the Irish fighter's jiu-jitsu coach over alleged slurs against him, his family, religion and country. The incident was just the latest case of bad blood between the two. Last April, a member of McGregor's encourage threw a metal dolly at a bus that Nurmagomedov and his team were travelling in, leaving one of his staffers injured.