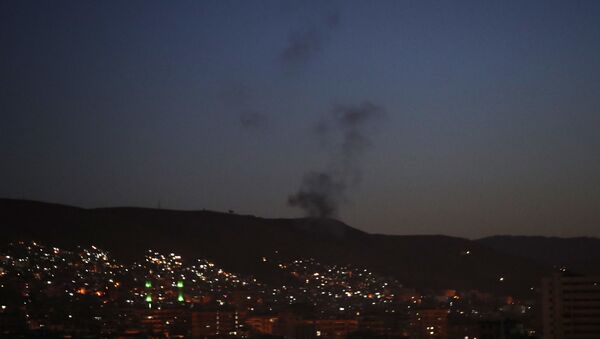 Earlier, the Israeli Air Force conducted airstrikes on targets in the suburbs of Damascus. An ammunition storage depot was allegedly damaged and three Syrian soldiers injured during the airstrikes.

According to Reuters, an Israeli security official, who spoke on condition of anonymity, said that the Israeli aircraft that carried out airstrikes in Syria hit several Iranian targets.

He said that the Israeli airstrikes hit Iranian storage and logistic targets, and also took out a Syrian anti-aircraft battery near Damascus, the Times of Israel reports.

Netanyahu: Israel to Boost Ops Against Iran in Syria Amid US Pullout
The Israel Defence Forces (IDF) has yet to comment on the incident.

Following the attack, the Russian Foreign Ministry stated that the Israeli airstrike threatened two unnamed passenger jets, which were landing at airports in Beirut and Damascus. Moscow described the attack as a "flagrant violation" of Syria's sovereignty and UN Security Council resolutions.

Damascus has condemned the attack on its territory.