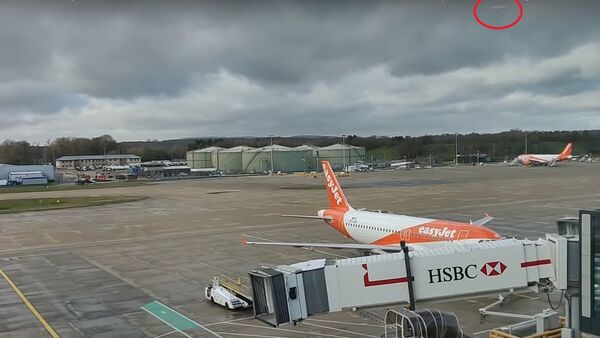 Theories are running wild about the origin of the drones that prompted Gatwick Airport to close its runway on Friday, with some claiming that the objects were literally out of this world. The truth is out there - as it always is.

UFO hunters have found fresh prey after social media was flooded with footage from the Gatwick Airport drone attack.

A YouTube clip, filmed by Chris Waite from the North Terminal, shows what looks like a disk-shaped object hanging still in the air in the top-right corner.

While some sharp-eyed users rushed to the comment section to brand it an alien spacecraft, some surmised that it could be a reflection in the window that the man was filming through.

On top of this, a video shot in the vicinity of Gatwick's airfield later at night features a strange radiant object moving across the sky. This fuelled the concerns of truth-seekers, who said that a drone could not stay in the air for a long time due to short battery life, and it could not be it a helicopter, because they have blinking lights.

"The government [sic] always lying to the public. That's not a drone!" Hemi McDade wrote.

"Drones run on batteries and no drone could stay in air for more than 30 minutes or maximum 1 hour. It's a UFO", another user alleged.

"They invented the ‘drone' thing to cover up the fact that it's an UFO, to not create any panic in the airport, or even the world, if it was a drone, they would catch the guy who owns it or shoot it down", said a man going by handle David C.

Gatwick, the second-biggest airport in the UK, suspended operations for 36 hours on 20 December and rerouted flights to other airports after several drones were seen hovering above its grounds.

Sussex Police launched an investigation into the sightings, stating that the drone flights were a deliberate act, but were not a terror threat.