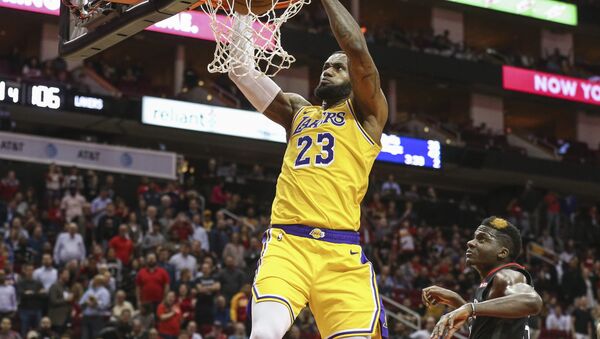 © REUTERS / Troy Taormina-USA TODAY Sports
Subscribe
Last week, James slammed NFL owners for having what he described as a "slave mentality" towards their players. He claimed that mainly African-American NFL players are often subject to treatment he likened to slavery.

NBA star LeBron James has come under fire after posting what many have described as anti-Semitic lyrics on his Instagram account.

The 33-year-old Los Angeles Lakers forward posted a photo of himself captioned with lyrics from a song by American rapper 21 Savage, writing: "We been getting that Jewish money. Everything is Kosher".

Shortly after, James extended  apologies  for his actions, saying that he did not want to "hurt anybody".

"Apologies, for sure, if I offended anyone. That's not why I chose to share that lyric. I always [post lyrics]. That's what I do. I ride in my car, I listen to great music, and that was the byproduct of it. So I actually thought it was a compliment, and obviously it wasn't through the lens of a lot of people. My apologies. It definitely was not the intent, obviously, to hurt anybody", James told ESPN.

This is an anti Semitic stereotype used for centuries to foster hatred against Jews. @kingjames the nazis spread this nonsense everywhere #wordshavemeaning posting words to 44 million people has a ton of meaning.

Sports Business reporter Darren Rovell was quick to react by urging James' followers to "go find a Jew and read this to them".

Rovell was echoed by others who accused James of saying "irresponsible things" and urging the NBA "to take some action" and suspend him".

#Antisemitism is in fashion…@NBA should make an example on @KingJames stupidity!!!

I find it tough to believe anyone could write those words and not be aware of what it means.

If he posted this, LeBron made a huge mistake. This will stay with him for the rest of his life. And I’m pretty shocked so many don’t think this is highly offensive. It is. It just destroyed my opinion of him.

@NBA it’s time for the league to take some action this deserves a suspension. Absolutely no reason for this. This comes right after his comments about @nfl owners. It may be time to ask the question is LeBron a #racist

Go find a Jew and read this to them. Any one — Adam Silver, Dan Gilbert, David Stern — then tell me how they reacted and come back to me.

One netizen argued that by LeBron had "made a huge mistake" because "this will stay with him for the rest of his life".

James' millions of supporters, in turn, ridiculed the anti-Semitic insinuation by his critics amid a social media debate on "whether someone posting song lyrics can be held accountable for simply sharing the words", according to Newsweek.

Can someone explain how this is offensive, I don't see it but am also not Jewish

The artist is 21 Savage. He’s made a significant transition in his life from making money in the streets to making money as a business owner and musician. “Everything is kosher” = everything is legit. He’s not even talking about how much money instead its about how its made

AGAIN THE ARTIST IS SAYING… we are getting money in a kosher way. Meaning we are getting legitimate money. But you don’t listen to rap so you aren’t aware of how we use language

James' post came after he made controversial remarks on the HBO show "The Shop" where he claimed that African-American players are frequently subject to treatment that he likened to slavery.

"In the NFL they got a bunch of old white men owning teams and they got that slave mentality. And it's like, 'This is my team. You do what the f**k I tell y'all to do. Or we get rid of y'all,'" he said.