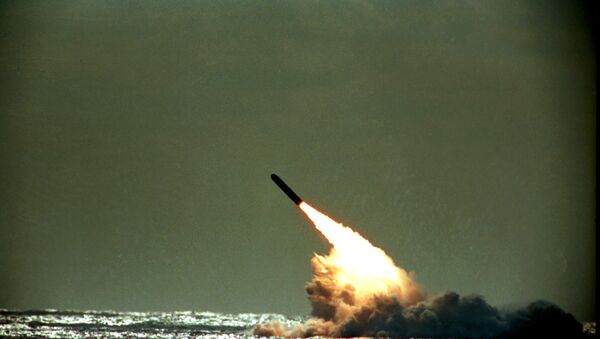 © AP Photo / Phil Sandlin
Subscribe
On Tuesday, North Korea called on the US to remove “all sources of nuclear threat” in and around the Korean Peninsula as a precursor to North Korea’s own denuclearization.

The process is "a joint business," the statement run by Korea Central News Agency (KCNA) says, noting that "it cannot be achieved unless both Korea and the United States strive tougher."

At the June 12 summit in Singapore, North Korean leader Kim Jong Un agreed with US President Donald Trump to a mutual pledge toward total denuclearization of the Korean Peninsula. However, since then, Kim has made clear that his country, formally named the Democratic People's Republic of Korea (DPRK), has no intention of disarming unilaterally, having obtained nuclear weapons as a guarantee of self-defense in the first place.

"The proper definition of denuclearization of the Korean Peninsula is completely eliminating the American nuclear threat to North Korea before eliminating our nuclear capability," Tuesday's statement reads. "The United States must now recognize the accurate meaning of the denuclearization of the Korean Peninsula, and especially must study geography."

It's unknown what nuclear weapons are stationed in the vicinity, and a US defense official contacted by CNN said, "We do not discuss the location of nuclear weapons." However, they noted that in the 1990s, "President George H.W. Bush announced the withdrawal of all naval and land-based tactical nuclear weapons deployed abroad."

Although the DPRK has taken many unilateral steps toward ending its nuclear program, including the dismantling of its nuclear testing ground and parts of a missile engine test facility, along with having suspended nuclear and long-range missile tests, the US is adamant that the DPRK must produce more unilateral proof of its intention to comply with the June 12 agreement before the US will lower economic sanctions against the country, which leave it with few opportunities for international trade.

Most recently, Pyongyang said in September it would dismantle its main nuclear facility at Yongbyon, which produces plutonium and tritium for thermonuclear weapons, if the US responded with "corresponding measures," which KCNA later specified as sanctions relief.

In turn, Western think tanks and media regularly drum up rhetoric claiming to have discovered some new secret test facility that proves the North Koreans aren't engaging in good faith or that some new action or statement proves Trump's folly at having trusted Kim to disarm.

"If we unilaterally give up our nuclear weapons without any security assurance despite being first on the US list of targets for pre-emptive nuclear strikes, that wouldn't be denuclearization — it would rather be a creation of a defenseless state where the balance in nuclear strategic strength is destroyed, and the crisis of a nuclear war is brought forth," the KCNA statement said.

Yang Moo-jin, a professor at Seoul's University of North Korean Studies, told AP Thursday that "Pyongyang is sending a message to Washington that confrontation and dialogue cannot coexist."

On the other side of the coin, 2018 has been a year of growing warmth between North and South Korea, which began in February with a joint Korean team competing in the Pyeongchang Winter Olympics, in September saw a historic end-of-war declaration by Kim and South Korean President Moon Jae In in Pyongyang, and most recently brought the relaxation of tensions along the demilitarized zone separating the two countries, including limited train passage, trade and tourism.

Commentary on 38 North, a website dedicated to analysis of Korean politics, noted late last month that at this stage in negotiations, demanding from Kim "a full and complete declaration and to agree on adequate verification measures" about the dismantling of North Korean nuclear weapons was "a dead end because it is tantamount to surrender."

"[I]nsisting on this approach is a dead end, certainly as long as Washington continues to apply ‘maximum pressure' instead of moving to implement the steps on normalizing relations that President Trump agreed to in the June Singapore statement," wrote 38 North contributor Siegfried S. Hecker.

Clearly, Trump and Kim will have much to discuss at their proposed second summit in early 2019.

000000
Popular comments
North Korea is right. What should North Korea give up its nuclear arsenal if USA keeps its nuclear arsenal? If USA gives up all its nuclear bombs, so will North Korea. As it is now, if USA does not put an end to its invasion of Korea by removing all its soldiers and its military equipment out of Korea, the US population stands at risk of being vaporized. It is dangerous to occupy part of a country that has nuclear bombs and ICBMs.
Wyo dragon
21 December 2018, 02:22 GMT1
000000
. When pompous Pompeo, mad Mattis, bolted Bolton, and above all their chief the trumpetty Trump were going hyper bellicose on North Korea deal, the sane section of the world had commented that the Korean state is unlikely to denuclearise itself unconditionally. Well, the truth is unbared now that the present bunch of idots in the Trump administration are unqualified to handle transborder issues. They don't have any realistic appraisal of the global issues.