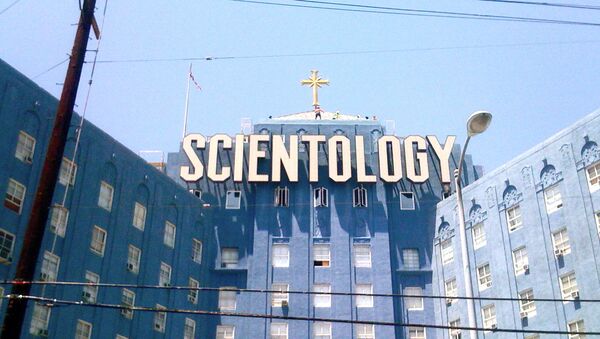 © Flickr / Cameron Parkins
Subscribe
Florida’s prison system has given the green light for the Church of Scientology to operate a “betterment program” for inmates via its Criminon rehabilitation program. The group is in 120 Florida prisons, and the most recent class of graduates finished their course last Thursday.

Criminon might at first seem an unlikely group to be admitted to any prison system, given its extensive criticism of the conditions in which inmates are housed, including opposing psychiatric care and anti-psychotic drugs, which it describes as keeping inmates "forcibly drugged to keep them under control."

Criminon has widespread operations across the US. Its website claims it services roughly 100,000 inmates in more than 2,000 prisons "through correspondence courses or delivering on-site seminars, with remarkable results."

"Criminon provides inmates with the knowledge and skills to change their lives and become productive members of society," the group's page continues. "Inmates who have completed the Criminon program show dramatic improvements in compliance with conditions of probation — including restitution, fine payment and community service."

The group's website notes that Church of Scientology founder L. Ron Hubbard sowed the seeds for the inmate rehab program, laying out a boilerplate 21-step path to happiness reminiscent of other religiously motivated rehabilitation and moral betterment programs.

In 2016, Criminon President Greg Capazorio boasted at an end-of-year symposium at the group's new headquarters in Clearwater, Florida, about the effectiveness of the group's programs in South African prisons in a bid to convince Florida officials of its ability to address violence in the Lowell Correctional Institution.

According to a press release, the head of internal security at the Leeuwkop Maximum Security Prison in South Africa told Capazorio that following introduction of Criminon programs, "the number of gang fights in the prison went from 1,087 in one year to zero for the next subsequent seven years."

"At Leeuwkop, the first Criminon training session was attended by about 50 inmates. In the second session, we had hundreds," said Capazorio. "The inmates were telling their friends about [the program], who were turning up with their own friends and even family. In four weeks, we had turned all the attendees into people who cared and wanted to improve their lives."

Capazorio also said that the program was so successful that "the government ended up taking it on as their own program. They were saying, ‘This is our program!' The prison special ‘trouble unit' was emptied. Prison gang violence went to zero."

Despite its religious veneer, the Church of Scientology has repeatedly been denied the right to call itself a church in several countries, although it is listed as such by the US Internal Revenue Service. Critics and disgruntled members allege the group is a cult that collects information on its members to intimidate them into staying in the organization, the Miami New Times noted.

Central to the group's teachings are that negative spirits called "thetans" inhabit our bodies, causing negative emotions. The only way to remove these negative spirits, and thus the negative feelings they cause, is by confession to a church member — confessions the group records, according to MNT. That dirt can resurface decades later if members try to leave or speak out against the group.

Michelle Glady, communications director for the Florida Department of Corrections, told the Florida Times-Union for a story published Tuesday that while Criminon's classes span a variety of areas, from parenting to drug addiction, she wasn't aware of its views on psychiatry and mind control. However, she assured the publication that such teachings wouldn't be allowed in Florida correctional facilities.