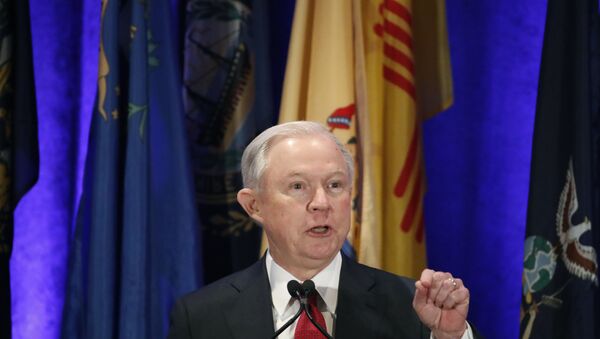 © AP Photo / Alex Brandon
Subscribe
International
India
Africa
Earlier this month, US Attorney General Jeff Sessions rescinded an Obama-era guidance to state courts intended to end the practice of imprisoning those who are too poor to pay traffic tickets or other low-level civil infractions are sent, creating in essence debtors’ prisons.

Kevin Gosztola, writer and co-host of the podcast Unauthorized Disclosure, and Paul Wright, founder and director of the Human Rights Defense Center, joined Radio Sputnik's Loud and Clear and hosts Brian Becker and John Kiriakou to discuss how the retraction of a guidance meant to spark reform is a blatant indication that the federal government has no shame in revoking the civil rights of low-income Americans.

​"This [the revocation of the guidance] is [an example of] consolidating power and keeping poor people in line," Wright said on the show. "The US government is locking people up because of poverty. It is important to note that the Obama-era guideline didn't have much of an impact of those people in jurisdictions like New Orleans or Missouri where there are huge numbers of people being locked up," Wright also said, revealing that debtors' prisons were still a very real problem even when the Obama-era guideline was in place.

Kirikou agreed, "We hear all the time about poor people who are unable to pay fines and when they can't pay fines, they end up having their driver's licenses revoked, let's say, and if their drivers' licenses are revoked, then they are arrested for driving without a license, and they start the whole prison cycle again." State laws allow or require the suspension of drivers' licenses for unpaid court fines without first confirming that the person can afford to pay such fines, he noted.

The 2016 guidance, which was issued by former President Barack Obama's Justice Department, urged state and local courts around the nation to end the practice of imprisoning people who are unable to pay court fines and fees. The guidance was issued after multiple reports and lawsuits by the American Civil Liberties Union (ACLU) and other nonprofit organizations, asserting that this was akin to creating debtors' prisons in more than a dozen US states.

"I think Sessions repealing the Obama guideline is basically greenlighting it to the local jurisdictions that ‘hey, you don't have anything to worry about Washington. You can do whatever you want to.' [However], it wasn't like Washington was doing a lot to stop these actions [imprisoning those who can't pay] before this. They blossomed and took place pretty massively over the last few years," Wright added.

Gosztola also pointed out how the US Justice Department gave insight into debtors' prisons when it investigated the killing of teenager Michael Brown by a police officer in Ferguson, Missouri, three years ago. The investigation revealed that the city was violating the US Constitution by jailing people too poor to pay fines in an effort to profit from its most vulnerable populations. When tickets go unpaid, people are sent to court and usually offered new payment plans. If they don't pay the new fines, they are arrested and the government ends up reaping a massive revenue as a result through heftier fines.

In 2013, Ferguson collected $2.6 million in court fines and fees, mostly on traffic violations and other civil infractions, making it the city's second-largest income source.

"I would remind people who are listening that after Michael Brown was killed there was a huge focus on how those jurisdictions were using debtors' prisons to raise revenue on the backs of the poorest people. Some of the statistics around those cases were staggering, and it was believed that around 2013, the average household in Ferguson had three outstanding warrants around them. Many of the offenses were traffic violations and they would build up on [the violators] until they would end up in jail," Gosztola explained.